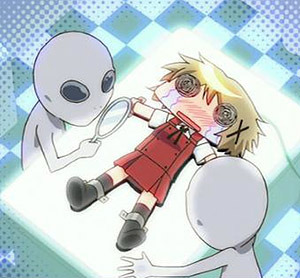 Now, which of these parts is the human nutbladder?
Advertisement:

When an alien from another planet, whether one of the Little Green Men or one of The Greys or whatever, kidnaps a human (often by way of Tractor Beam). The alien generally leaves no trace of the human until it's done with it. Alien abductions do get witnessed, but the witnesses are almost always portrayed as a bit mad even when the alien abduction is real in canon.

Humans returned from alien abductions usually have had bad things happen to them. They may have had a complete physical, possibly without anesthesia. They may have a little tracker planted in them. They were most certainly probed and violated though. And even a benign alien can cause an abduction, and cause problems, if Time Travel in either direction happens. Or they have been forced to be The Chosen One.

Sometimes, if the alien is benign, the human will witness something that makes the abduction worth the trouble. If the aliens' interest is scientific research, expect them to be terrible at it: No Control Group, no reliable tranquilizers (because how else could abductees keep waking up too soon, so they can see they're in a spaceship?), and no acknowledgment that it's indiscreet to keep abducting idiots who'll rush to spill their story to the tabloids.

Malevolent aliens don't always bother to return the human. There might not be anything to return.

Before aliens from outer space became a popular concept, literature and folklore used fairy abductions, demon abductions, and gods abducting fair maidens. Many of these stories reflect sexual urges excused and resolved through the agency of an irresistible entity like a god or alien.

Some of the missions in the space stage of Spore require you to abduct a citizen or wildlife. Be warned as it may anger citizens of the local empire.

Some of the missions in the space stage of Spore require you to abduct a citizen or wildlife. Be warned as it may anger citizens of the local empire.