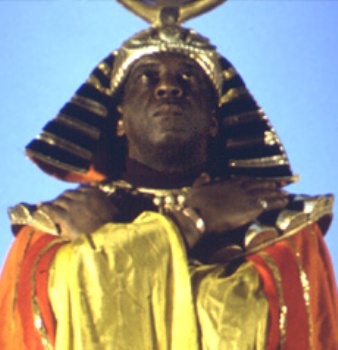 Sun Ra (born Herman Poole Blount, legal name Le Sony'r Ra, May 22, 1914 – May 30, 1993) is one of the oddest oddballs in Jazz. Despite being born as Herman Poole Blount in Birmingham, Alabama, he denied this person ever existed and claimed he was actually born as Sun Ra on the planet Saturn, where he was abducted by aliens and brought to Earth. They apparently told him to spread a message of intergalactical brotherhood and peace, which he took very seriously.

He and his band members began dressing up in Egyptian headgear and costumes and performed mystical music, characterized by long hypnotizing performances, mixed with Ancient Astronauts themes and imagery borrowed from Ancient Egypt culture and mythology. Sun Ra became very popular near the end of the 1950s and especially during the 1960s where fans of Psychedelica adored his shows. In 1974 he even managed to produce a feature film called Space Is The Place.

Sun Ra was definitely a very eccentric person. As an asexual he had no interest in romantic relationships. He was a very disciplined and a spiritual man who refrained from drinking alcohol and taking other drugs. He also genuinely believed the Science Fiction background he imagined for himself. During his final illness, Sun Ra's baffled physician called a neurologist for his advice. "This man insists he's from Saturn. What should we do?" The second doctor arrived, and taking one look said, "This is Sun Ra; of course he's from Saturn."

Also note that Sun Ra's extraterrestrial musician concept happened decades before David Bowie recorded Space Oddity (1969) and The Rise and Fall of Ziggy Stardust and the Spiders from Mars (1972). Sun Ra was also a pioneer in using keyboards, synthesizers and influences from other genres in his work, predating Miles Davis' late 1960s experiments with jazz fusion. He is considered to be the Trope Codifier and Genre Popularizer for Afro-Futurism and was a big influence on George Clinton's stage shows and albums with Parliament and Funkadelic in the 1970s. Other fans of his music are Devo, who started their career as an opening act for his shows, MC5, The Residents, Matt Groening, dEUS and Björk. If you want to check out his work you may experience Archive Panic, for he was active from 1934 until his death in 1993, releasing well over 100 albums, comprising over 1000 songs. Not to mention the seriously limited editions pressed and printed by Ra and The Arkestra themselves. They used to doodle on the album covers before it was cool. These releases often had tracks available nowhere else.

To this day, the Sun Ra Arkestra continues to tour under the direction of Long Runner saxophonist Marshall Allen, which has acquired its own discography as well, and hopefully sending fans into space for years to come!