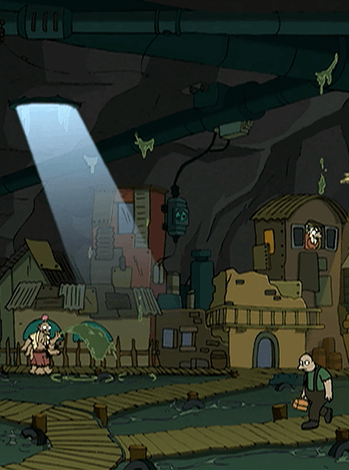 "All the roots hang down, swing from town to town
They are marching around down under your boots
All the trucks unload beyond the gopher holes
There's a world going on underground."
— Tom Waits, "Underground" — Swordfishtrombones
Advertisement:

A very short distance beneath our feet, there dwell fantastic beings, societies and terrors.

Those who live Beneath the Earth are often exiles from the World Above. They fled either to create a new home for themselves, or to harbor their grudge for revenge (depending on how well they did). Alternately, they may have fled to escape The End Of Their World As They Knew It. If they had better technology or more resources, they might have built an Elaborate Underground Base or even an Underground City; but if they don't they have to make do with simple caves and tunnels.

The urban area version of this trope is a remarkably livable sewer system. Sewers are surprisingly clean and warm, relatively speaking, with good lighting and electricity access. Maintenance crews never stumble across the living quarters, nor do power companies realize the drain. (Sewer Dwellers don't pay electricity bills.) Other times, the ruins of an older city may be paved over when a new one is built, leaving the remnants of old streets and buildings to form an under-city home to surviving stragglers, giant vermin, and assorted eccentrics. New York has an especially crowded sewer system.

Go a few kilometers deeper, and the Earth's crust is filled with spacious caverns. The really lucky underground dwellers will have a Lost World thing going, with flora and fauna in abundance (although occasionally with monsters like dinosaurs). If this subterranean landscape is so vast and habitable that it effectively has a sky, it qualifies as a Hollow World.

Not so lucky ones (who often want revenge on whoever forced them to live here) get gloom, fungus (often of incredible size and possibly sentient) and lava (which tends to be somehow survivable). Often based on The Morlocks in H. G. Wells' book The Time Machine. Particularly well-to-do ones will build an Underground City instead.

Often found side-by-side in with the Underground Level and Absurdly-Spacious Sewer. In mythology, folklore, and fantasy, this is typically where you'll find The Underworld. (Or that other place.) In Science Fiction and pulp settings, this will often be home to the Mole Men or dinosaurs in a Lost World. In fantasy, expect instead to find dwarves, goblins and dark elves making their homes down here. Subterranean civilizations armed with giant Robeasts are a common Super Robot series antagonist. The King in the Mountain can also be found here, resting until his hour of need comes again. When there's a whole hidden social system living underground, in secret but fairly regular contact with the mundane surface population, that's a Wainscot Society. See also Mouse World, which is basically this but on a smaller scale, and Dug Too Deep.