Music / The Lamb Lies Down on Broadway 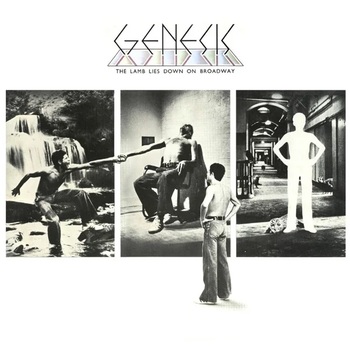 The Lamb Lies Down on Broadway is the sixth studio album by English Progressive Rock band Genesis, released on 22 November 1974 through Charisma Records in the United Kingdom and Atco Records in the United States, marking their first release on the latter label (having previously had Charisma distribute their material since Nursery Cryme in both the UK and the US).

After the commercial and critical success of Selling England by the Pound and its accompanying tour in Europe and North America, the band booked a three-month retreat in Headley Grange. Although it was a tough ordeal, not helped by the decrepit condition the workhouse was left in at the time and Peter Gabriel's estrangement with the band through his then-wife Jill going through a difficult pregnancy at the time, they decided on a double-album that would tell a concept storynote as a side note, Mike Rutherford suggested one based upon The Little Prince, but Gabriel turned it down; the theme would be revisited years later in Duke.

Gabriel, wishing to move the band away from their preestablished pastoral image, pitched a plot about Rael, a young half-Puerto Rican street kid from New York City who embarks on a surreal journey of self-discovery through a dream world. Concurrently, the music was made more aggressive, more surreal, and more improvisational, being pieced together from group jam sessions. It was after the allocated time in Headley Grange that they mixed and recorded the album in Wales, and Gabriel enlisted the assistance of Brian Eno for two of the tracks by way of synthesized vocal treatments.

Around release of the album, Genesis played on a supporting tour in North America and Europe, playing the entire album and only doing a couple old material songs as an encore. It wasn't all rosy however, since the equipment and effects had been faulty from time to time, including the infamous Slipperman costume where Peter Gabriel found it hard to breathe or insert the microphone. Also, he informed the rest of the band that he was planning to leave at the conclusion of the tournote at the time, he was heavily disillusioned with the music industry and wished to be back with his family, which was 22 May 1975 in Besançon, France. The departure led to a drive to get a new frontman, with Phil Collins happy to just have the group be an instrumental band before being persuaded to take the reins for A Trick of the Tail. Gabriel himself would reemerge a couple years later, starting his solo career with his first self-titled album before diving further into the abstract aggression that he began exploring here.

that contains various interpretations of the story, as well as an illustrated adaptation on YouTube

It's the grand parade of lifeless troping, all ready to use: