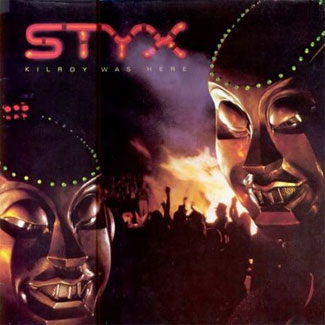 The time has come at last to throw away this mask
Now everyone can see my true identity
What can I do, pictures of you still make me cry
Trying to live without your love, it's so hard to do
Some nights I'll wake up I'll look at your pillow
Hoping that I'll see you there

Wait and see time is all that we really need
I'm praying you won't say no, I mean to tell you
—"Don't Let It End"
Advertisement:

Kilroy Was Here is the eleventh studio album recorded by American rock band Styx. It was released through A&M Records on February 22, 1983.

Following on the success of the Concept Album Paradise Theatre (and three multi-platinum albums before that), Styx decided to get far more ambitious with a full-on Rock Opera. It would be promoted with a deliberate and complex tour, with a pre-concert mini-film that set up the story, scripted dialogue and choreography in concert, and specific roles for each of the band members.

The storyline: 20 Minutes into the Future, Moral Guardians outlaw rock and roll. Enforcing the new law, a riot breaks out at a concert by the famous "Kilroy" at the Paradise Theatre, someone dies, and Kilroy is framed as a murderer. He is imprisoned, guarded by "Mr. Robotos", mass-produced menial-labor robots. Kilroy breaks out, disguising himself in the body of a Roboto he has overpowered. Using a "rock code" graffiti, he leads a protegé, Jonathan Chance, to meet him in the Paradise Theatre, now a museum to rock-and-roll depravity. And then it ends.

The story has many similarities to Frank Zappa's Joe's Garage: both feature robot-filled futures with moral overlords who hate rock-and-roll and throw the rocker protagonist in prison. Zappa's work is distinguished by having trickier time signatures, as well as much more gay sex with robots. You could almost mistake Joe's Garage for a parody of Kilroy Was Here, but for the fact that Joe's came out four years earlier.

Instead of taking their career to the next level, the band jumped the shark, breaking up and never going multi-platinum again. The album's convoluted production is chronicled on an episode of Behind the Music. The album was critically panned, only garnering 2 out of 5 stars from Rolling Stone. Commercially, it was nowhere near as successful as the band hoped, only earning one Platinum from the RIAA.

The album yielded three singles: "Mr. Roboto", "Don't Let It End", and "High Time". Only the first two were hits in the United States, neither one hitting #1. They wouldn't yield another hit for seven years.

BTW: It is not to be confused with the World War II era Bathroom Stall Graffiti.