Music / A Trick of the Tail 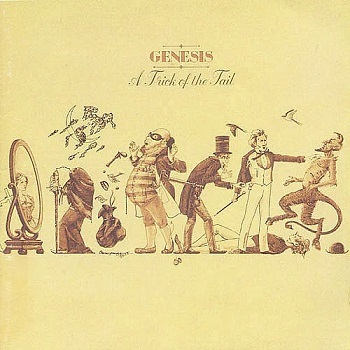 "Let the dance begin!"
"'They got no horns and they got no tail.
They don't even know of our existence.
Am I wrong to believe in the City of Gold
That lies in the deep distance?' he cried and wept."
— "A Trick of the Tail"
Advertisement:

A Trick of the Tail is the seventh studio album by Genesis, released on January 1976 by Charisma Records in the United Kingdom and Atco Records in the United States. It was their first album released after the departure of frontman Peter Gabriel, and the remaining members were faced with the daunting task of replacing a strong vocalist and moving on as a band. After initially unsuccessfully auditioning for a replacement lead vocalist, they were so impressed with drummer Phil Collins' performance that they gave him the role. To compensate for his double-duty as both drummer and the band's new vocalist, former Yes and King Crimson percussionist Bill Bruford was hired to play drums in Collins' stead during the album's supporting tour.

A Trick of the Tail was supported by two singles: the Title Track and "Entangled". The former song, "Ripples", and "Robbery, Assault, and Battery" would also be the first three in Genesis' career to receive music videos, all directed by Bruce Gowers (who had previously directed videos for Mike Oldfield, 10cc, and especially Queen, particularly the latter's "Bohemian Rhapsody").

"There's an angel standing in the sun, free to get back home."