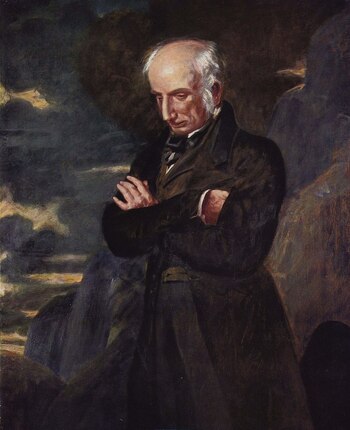 Portrait by Benjamin Haydon
"What is a Poet?... He is a man speaking to men: a man, it is true, endowed with more lively sensibility, more enthusiasm and tenderness, who has a greater knowledge of human nature, and a more comprehensive soul, than are supposed to be common among mankind; a man pleased with his own passions and volitions, and who rejoices more than other men in the spirit of life that is in him; delighting to contemplate similar volitions and passions as manifested in the goings-on of the Universe, and habitually impelled to create them where he does not find them."
—William Wordsworth, Preface to Lyrical Ballads
Advertisement:

William Wordsworth (1770–1850) was an English Romantic poet who, with the help of Samuel Taylor Coleridge, launched the Romantic movement of literature in England with the publishing of their Lyrical Ballads in 1798.

Wordsworth was born at Cockermouth, in Cumberland, on 7 April 1770, the second son of John Wordsworth, attorney-at-law for a Sir James Lowther; and Anne Cookson, daughter of William Cookson, a mercer. His siblings were Richard, Dorothy, to whom throughout his life he was especially close; John, and Christopher. His parents died prematurely, his mother when he was eight, his father when he was thirteen. At the age of eight Wordsworth was sent to school at Hawkshead. He recalled his days in the school very fondly, as he was allowed at school and in vacations to read what he pleased, reading the works of Henry Fielding, Jonathan Swift, Gil Blas, and Don Quixote.

Hawkshead School is also where Wordsworth began writing poetry, and he wrote "The Summer Vacation", his first poem, as part of a school assignment. He was once called upon to write a poem to celebrate the second centenary of the foundation of the school in 1585. Though the poem was much admired, Wordsworth himself thought it was a mere imitation of Alexander Pope, but it inspired him to write from the impulse of his mind.

In 1787 he went to St John's College in Cambridge, where he took his degree in 1791. He seemed to have profited little during his time there, and his primary consolation was the thought that he was walking where the great poets before had walked and mused. As an undergraduate, he also travelled and wrote poetry, even experiencing the French Revolution first-hand. He spent his twenties as a wanderer, in France, Switzerland, Wales, London, the Lakes, Dorset, and Germany. In 1794 he reunited with Dorothy and met Coleridge, with whom he published the Lyrical Ballads and to whom he addressed The Prelude, his semi-autobiographical poem.

In the last days of the century, Wordsworth and Dorothy settled at Dove Cottage, Grasmere, where Wordsworth wrote much of his best-loved poetry, and Dorothy her famous Journals. Wordsworth also published the second volume of the Lyrical Ballads in 1800 and married Mary Hutchinson, a childhood friend.

He eventually established himself as the great poet of his age, a turning point coming with the collected edition of 1815, and he became Poet Laureate in 1843.