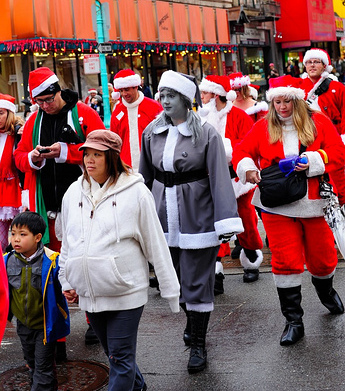 Believe it or not, this wasn't photoshopped.

"You see dimensions in two,
State your case with black or white"
— The Fixx, "One Thing Leads to Another"
Advertisement:

Sometimes, the less we say, the more gets said. Despite and because of its simplicity, complexity, stark contrast and cultural cachet, Black and White movies and stand-alone TV episodes have remained popular in a few genres and story niches. Its uses vary, but these works are deliberately desaturated to help the general mood and theme of the Film.

While no genre has a lock on B&W, the likeliest to use it are Film Noir, detective stories and historical films or paying homage to historical films. The themes that can be expressed or heightened with B&W are generally moral ambiguity, Zeerust, mystery, drama and tragedy.

There are a few common variants: Desaturation, Limited Palette, and Splash of Color.

Desaturating the color of a film can also be used to mimic the look of older films, particularly colorized black-and-white films or faded prints of color films. This has led to use of Sepia tones (browns and tans that mimic faded photographs) to indicate the scene in question is a flashback. It's worth noting that combining a Desaturated picture with Splash of Color can result in a Limited Palette. It can also be used to symbolize depression.

A Limited Palette is a work completely in Black and White except for one or two recurring colors, shown in full vibrancy and linked to an important character or object. It's as if someone was making a "Paint by Numbers" movie with only two colors available. The net effect of these strategic and recurring uses of color in a B&W film may help to draw the viewer's attention; whether it’s to the MacGuffin, the Femme Fatale or Chekhov's Gun. The colors themselves also inform roughly what emotions or themes are present in the work. Whereas Splash of Color is usually just a visual grab, a Limited Palette with colors like red or blue means the world is violent or sad, and that the character or object is somehow more alive or real than the world they're in. This is why a common Flashback Effect is to use a limited palette of warm colors to signify happy and old memories. Until the tragedy kicks in, anyway.

A Splash of Color is much like the above, but appears only once or twice throughout the entire film as opposed to throughout.

In infomercials, Deliberately Monochrome signifies the "old-fashioned" (and usually inferior) way of doing things. The woman tangled in a mess of cling wrap or cutting her fingers off while paring potatoes with a knife will usually be in black-and-white, while the woman easily covering leftovers with a Covermate or "peeling" a potato with the Handy-Peel will be in full color.

See also Retraux, Real Is Brown, and Color Failure. A Monochrome Past is this trope limited to a flashback. Compare Colorization.

Call of Duty World at War

The intro to "Call of Duty: World at War", which uses a black and white look in order to blend with the actual footage used throughout.

Call of Duty World at War

The intro to "Call of Duty: World at War", which uses a black and white look in order to blend with the actual footage used throughout.