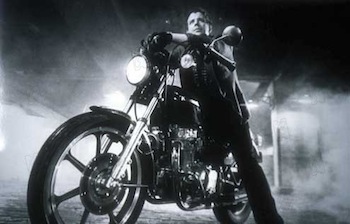 Rumble Fish is a 1975 coming of age novel by S. E. Hinton, and the sequel to her first classic, The Outsiders, although the links between the two are slight.

The plot concerns Rusty James, an Emo Teen on the inside, ruthless gangster on the outside, who is constantly trying to live up to the reputation of his older brother, The Motorcycle Boy, who has grown bored with life and is, ironically, trying to escape from the reputation he has created. When The Motorcycle Boy comes back to town after several months on the road, Rusty James' world comes crashing down as he comes to terms with the fact that his brother's violent lifestyle is something that he can never have, and that he must rise above the only world he has ever known in order to prove himself the man he's always wanted to be, which means letting go of his brother.

Was made into a strange but stylish, black-and-white feature film by Francis Ford Coppola in 1983, written largely by S. E. Hinton herself. Bashed by critics on its release for being confusing, and hugely unconventional, the film is now considered something of a cult classic, with many modern critics preferring it to the first film, The Outsiders. The film starred Matt Dillon, Mickey Rourke, Diane Lane, Nicolas Cage, Vincent Spano, Diana Scarwid and Dennis Hopper.

Has no relation to the 2004 Fighting Game The Rumble Fish.