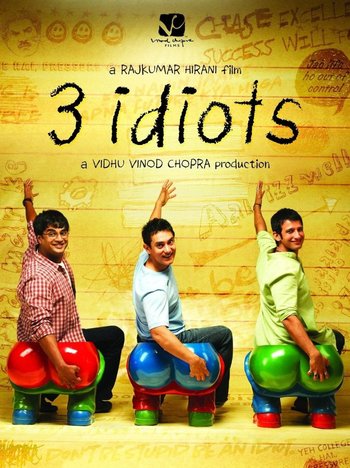 3 Idiots is a 2009 Bollywood coming-of-age Dramedy film starring Aamir Khan, Sharman Joshi and R. Madhavan. It is based on the book Five Point Someone by Chetan Bhagat.

The film revolves around three students studying in the Imperial College of Engineering in Delhi. One of them, Raju Rastogi (portrayed by Sharman Joshi), comes from a poor family and is desperate to pass and get a good job. The second, Farhan Qureshi (R. Madhavan), comes from a middle-class family, but has pursued engineering to please his father, while he actually wants to become a wildlife photographer. Their third roommate, Ranchoddas Shamaldas Chanchhad (Aamir Khan) is a stunningly intelligent, radical-thinking young man, who challenges the inhumane educational system and stifling society with every step he takes, infuriating the director of the school, Viru Sahastrabuddhe (Boman Irani), and the director's daughter, Pia (Kareena Kapoor).

Farhan and Raju lose contact with Rancho after graduation. Ten years afterwards, Farhan gets a call from an old classmate of theirs, Chatur Ramalingam (Omi Vaidya), who says he has found out where Rancho is. Abandoning everything, Farhan and Raju accompany Chatur and set out on a road trip to find him. But all is not as it seems...

Underneath its humor, the film was a social commentary on the cutthroat educational system and societal pressure, but it also has a strong message of how life is worth living for. Not to mention, the film contains several major twists and surprises, so if you have any interest in seeing this film and have not yet done so, it is strongly advised that you do not read any further.