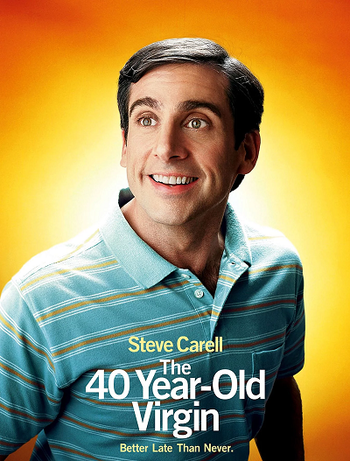 "Is it true that if you don't use it, you lose it?"
— Andy Stitzer
Advertisement:

Since we all know that no true man is a virgin and that Loners Are Freaks, this movie surprised many by portraying the title character, a virginal and nerdy (he collects action figures and comics) introvert, not as some kind of loser or freak but as a likeable fellow who's simply chosen not to have sex after a short series of rejections in his youth. Since it dresses in the skin of a Sex Comedy, it's also refreshing to see the subject of sex summed up as "a nice thing to have, but meaningless without love," as seen in Andy's well-meaning but dim-witted friends, who all lead active sex lives but are probably less happy than Andy because their romantic relationships are unfulfilling.