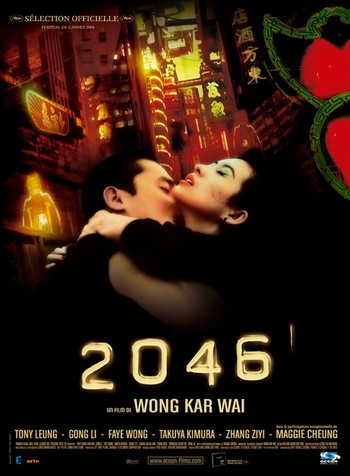 2046 is a movie by Hong Kong art-house director Wong Kar-wai. It is the final part of an informal trilogy of films, following Days of Being Wild and In the Mood for Love.

Following the events of In the Mood for Love, Chow Mo-Wan (Tony Leung) has coped with his unrealised relationship with Su Li-Zhen (Maggie Cheung) by becoming a ladies' man. The film centers on his relationships with three different women: his landlord's daughter, Wang Jing-wen (Faye Wong), a nightclub girl, Bai Ling (Zhang Ziyi), and a gambler coincidentally named Su Li-Zhen (Gong Li). Chow also writes a science fiction serial titled 2046, about a train traveling to a time/place called "2046" where passengers can recapture lost love.

The film was notorious for its Troubled Production, going through many re-writes and versions, before finally settling to the finished product. The four-year production paid off as it was highly critically acclaimed, and it received twelve nominations at the 2005 Hong Kong Film Awards, winning five: Best Actor for Tony Leung, Best Actress for Zhang Ziyi, Best Cinematography, Best Art Direction, Best Costume Make Up Design, and Best Original Score.