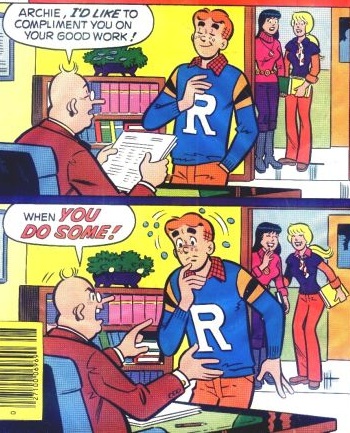 And we'd like to compliment the good job your hairstylist did... that is, if you needed one!
"Relax, Simpson. I just brought you in here for a friendly hello...
...and goodbye! YOU'RE FIRED!
But, wait. Perhaps I'm being too hasty. You are highly skilled...
...AT GOOFING OFF!
Now don't worry, Homer. You're the kind of guy I could really dig...
...A GRAVE FOR!"
— Mr. Burns, The Simpsons ("Homer's Triple Bypass")
Advertisement:

One form of this is to start with an analogy that is typically used in favour of perspective X... only to go on to describe why it makes more sense to use this analogy against perspective X instead. Another common one is "This isn't good...this is great" or "I didn't like it... I loved it." The fancy rhetorical term for this is paraprosdokian. If the character really was meaning to say the first thing, and then changed their mind, it's a Last-Second Word Swap or Verbal Backspace.

Compare Distinction Without a Difference, Dramatic Pause. Compare/contrast Cue Card Pause, wherein the timing of a pause creates a similar effect. Compare and contrast Last-Second Word Swap, where someone originally intended to say one thing and decides in mid-sentence to say something else instead.

Not to be confused with Bait-and-Switch Comparison. One of them is a trope where the meaning of people's sentences changes as they keep talking... and the other is Bait And Switch Comparison! (No, it really is. What, you were expecting a joke?)

Cowell: I don't like this TV Tropes article... I love it!

Serena is so smitten with Ash Ketchum, that she initially thought that he was going to deliver a Love Confession to her when Ash fell ill.

Serena is so smitten with Ash Ketchum, that she initially thought that he was going to deliver a Love Confession to her when Ash fell ill.