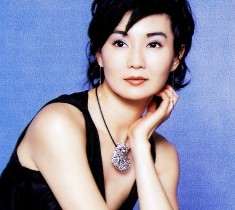 Maggie Cheung Man-yuk (Chinese: 張曼玉), born September 20, 1964) is a Hong Kong-born British actress mostly famous for her prolific career in Hong Kong in the 1980s and 1990s, with over 70 films to her credit. She has acted in Cantonese, Mandarin, English and French.

Born in Hong Kong, she moved to Britain when she was 8 and returned to her native city at age 18, when she began working as a model. She had several cameos in movies starting in 1984, but her breakthrough as an actress came in 1988 when she played May (Jackie Chan's girlfriend) in the Police Story franchise, and then co-starred in Wong Kar-wai's film As Tears Go By.

She collaborated again with Wong in several other movies, such as Days of Being Wild (1990). She played the legendary Shanghai actress Ruan Lingyu in Center Stage (1991) and starred in a number of Wuxia films such as New Dragon Gate Inn, Heroic Trio and Green Snake.

In 1996, she played herself in Irma Vep, during which she started a relationship with the director, Olivier Assayas. She also played in another French movie in 1999, Augustin Roi Du Kung-Fu while continuing her acting career in Hong Kong (Comrades, Almost A Love Story in 1996, The Soong Sisters and Chinese Box in 1997, In the Mood for Love in 2000). She played in Hero (2002) alongside Jet Li, Tony Leung Chiu-wai and Zhang Ziyi, and reunited with Assayas on Clean in 2004.

She has allowed her career to slow down since 2004, though she has played in a few more movies since then, and had a cameo (deleted in the final cut) in Inglourious Basterds.