Film / In the Mood for Love 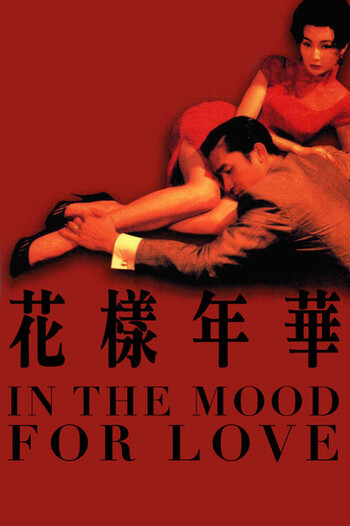 "It is a restless moment. She has kept her head lowered, to give him a chance to come closer. But he could not, for lack of courage. She turns and walks away."
— The opening intertitle
Advertisement:

In the Mood for Love (original title: 花樣年華) is a movie by Hong Kong art-house director Wong Kar-wai, who had previously made a name for himself with the critically acclaimed Chungking Express in 1994. Released in 2000, it is set in early 1960s Hong Kong within a Shanghainese community and tells the bittersweet story of Chow and Su (played respectively by Tony Leung Chiu-wai and Maggie Cheung) who are neighbors, and whose respective spouses have an affair with each other. While they find themselves increasingly attracted to each other, they refuse to give in to their feelings out of a sense of propriety.

It is the second part of an informal trilogy of films. The first, Days of Being Wild (1991), was (partly) about Maggie Cheung's character from this one. Tony Leung also appeared in an uncredited cameo, but it's unclear if he was playing the same character. The third film, 2046 (2004), is about Leung's In The Mood For Love character, with Cheung briefly appearing in flashback. Though thematically similar (as is much of Wong Kar Wai's work, which very often deals with the difficulty of finding love), the films don't have much in common story-wise. 2046 might spoil In The Mood... a little bit, but otherwise they're separate experiences.