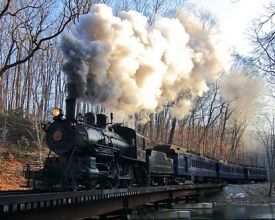 This tiny index is a collection of any and all tropes related in any way to railroads. As well as any works featuring railroads.

Not to Be Confused with Railroading, Underground Railroad, or Soul Train.

Works in which trains and/or railroads are important or featured: