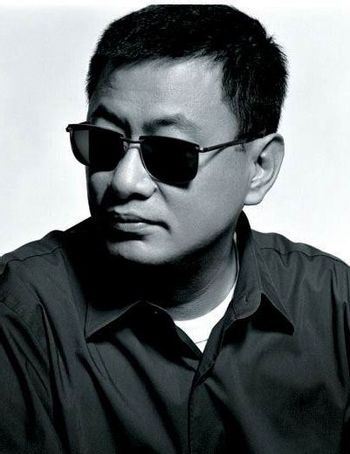 Born in Shanghai in 1958, he moved to Hong Kong with his mother as a child. Separated from his father, prevented from leaving China and speaking Mandarin rather than the local Cantonese dialect, he grew up with a feeling of exile and alienation, both themes that he explores in his oeuvre.

He graduated from Hong Kong Polytechnic College in graphic design in 1980, enrolled in the Production Training Course organized by Hong Kong Television Broadcasts Limited and became a television screenwriter. After a stint at Cinema City, he struck out as a freelance screenwriter, and directed his first movie, As Tears Go By, in 1988. It belonged to the urban thriller genre which John Woo was in the process of reviving, and also took inspiration from Martin Scorsese's Mean Streets.

With his second film, Days of Being Wild with Leslie Cheung in the main role in 1990, he defined his Signature Style, based on narrative ellipses, a melancholic atmosphere, and off-kilter characters. Although a commercial failure, this movie is hailed by critics as one of the best ever in Hong Kong cinema. Leslie Cheung won a Hong Kong Film Award for Best Actor for his role in the film.

After creating Jet Tone, his own independent production company, he started working on personal projects, such as Ashes of Time, a deconstruction of the Wuxia genre, and Fallen Angels, a neo-Film Noir. But his most successful movie of the period, which ironically was only intended as a semi-improvised filler project, was Chungking Express—a film that earned such gushing praise from Quentin Tarantino that he founded his own distribution company just to release it in the US.

Wong got further international recognition with his next film Happy Together (with Leslie Cheung and Tony Leung Chiu-wai in the lead roles playing lovers), which earned him an award for best director at the 1997 Cannes Film Festival; unlike all his previous movies, this one was shot in a foreign location, namely Buenos Aires. He finally got both critical and commercial success in 2000 with In the Mood for Love, an elegiac and understated love story set in the Hong Kong of the early 1960s.

His following film, 2046, a sequel of sorts to In the Mood for Love (which was itself a sequel of sorts to Days of Being Wild), was several years in the making, and was finally released in 2004 (a running joke among the crew was that the film would only be finished in time for year 2046). It's partially set in the year 2046 because that is the last year before Hong Kong's period of self-rule ends and, in 2047, the Chinese government begins to run it just like it runs the rest of the country. In 2007 he directed My Blueberry Nights, his first English-language film, starring Norah Jones, and in 2012 The Grandmaster, a biopic of martial arts master Ip Man.

He chaired the jury of the Cannes Film Festival in 2006. He is never seen in public without his Cool Shades.

, owing to his freeform, on-the-spot filmmaking style. He doesn't like to use scripts, doesn't really know what he wants in advance, improvises while filming and expect his actors doing the same thing without telling them how the story should be (as he doesn't know it himself yet) and spends lengthy amounts of time all but creating the finished film in editing, at some points only barely finishing it in time for its premiere.