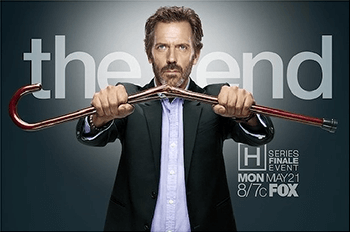 "Well, this is the end, beautiful friends. After more than 11 years, this is Toonami's final broadcast. It's been a lot of fun, and we'd like to thank each and every one of you who made this journey with us. Toonami wouldn't have been anything without you. Hopefully we've left you with some good memories. So, until we meet again, stay gold. Bang."
— TOM 4.0, delivering the final bumper

When a show (usually of the Failure Is the Only Option or Stern Chase variety) comes to an end with sufficient lead time, the production team may decide to go out with a bang by ending the endless chase, destroying the undestroyable foe, or in some other way definitively and permanently changing the core axioms the show depends on. It usually resolves all the conflicts that have driven the series over its entire run, and offers some kind of resolution to the dramatic tension that they have powered.

This is the Grand Finale, a way of very clearly saying to the audience "Okay, the show is really over. There's no more. Go watch something else." (That this doesn't always get through to viewers can be a problem in and of itself...) If this happens without warning, it's a case of The Resolution Will Not Be Identified.

In contrast to American television series, anime series tend to be single, continuous season-long stories that build, like an episodic novel, to a climax in the final episode. In these cases, a Grand Finale is the only fair (and the usual) way to end the show. Of course, since most anime is based on manga, occasionally the anime gets ahead of the manga (or gets canceled before the manga ends) and the anime writers have to make up their own ending, which is usually not as good as the eventual ending of the manga. Alternatively, a la Bastard!! (1988), Angel Sanctuary, and Strawberry 100%, the writers can just leave it hanging.

May often involve Gondor Calls for Aid or "Save the World" Climax. Expect Tear Jerker on a massive scale—the longer (or more beloved) the show, the more tears will flow. Contrast with Cut Short (when a series ends without a proper conclusion to the story), The Resolution Will Not Be Televised (when a cancelled series has its story wrapped up in a different medium), and Series Fauxnale (when a series does an episode that could work as a finale, but gets renewed for more episodes anyway). Compare with Season Finale (for final episodes of a show's seasons rather than the series in general), Finale Movie (for when a work that isn't a film series reaches its conclusion in the form of a movie) and sometimes Wrap It Up (when the production team decides to make a conclusion to the series fast after hearing that the series won't be renewed), though if the "Holy Shit!" Quotient is high enough it can qualify as a Wham Episode. If the production was big enough, popular enough, and is able to bolster its ideas to a larger extent because of that, combined with a budget that allows it, then the Grand Finale can undergo a Finale Production Upgrade.

There will usually be Call Backs, Continuity Porn, Continuity Nod and Bookends aplenty, along with characters coming Back for the Finale. A Will They or Won't They? running for the length of the series will usually get a Last-Minute Hookup. Expect to see Contractual Immortality and Joker Immunity thrown out the window. Given its nature as being the very final entry of the series, there may even be some End-of-Series Awareness beforehand. Sometimes accompanied by The Last Title. See Network Finale when this happens to a TV or radio station. Also see Series Fauxnale for installments that were intended to be this for a work, only for the work to continue onward anyway.

As this trope deals with endings, it obviously comes with UNMARKED SPOILERS.

The last ever clip of Arthur, which shows that the titular character has written a graphic novel about his life.

The last ever clip of Arthur, which shows that the titular character has written a graphic novel about his life.