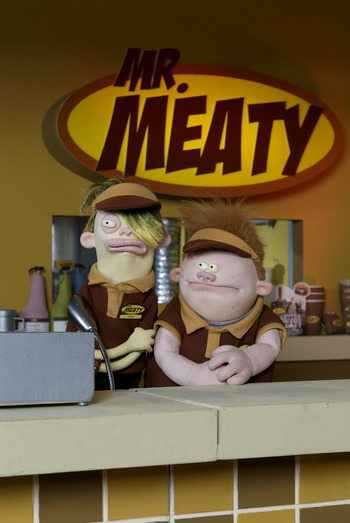 All of God's creatures, fresh off the grill... So come on down to Mr. Meaty where friends meet to eat meat! Note: Left to Right Josh and Parker.
Advertisement:

Mr. Meaty is a "children's" show, ages eight and up, debuting on Nickelodeon and CBC in 2006. It's about two teenagers, Josh and Parker, who work in a mall at a fast food restaurant called, well, Mr. Meaty. Josh is snarky, tall, often scheming to get money, get girls to notice him, or just in general. Best Friend Parker is a lovable moron who's also The Pollyanna and is incredibly nice. They work for Mr. Carney, the thawed out (but not completely, as he still looks like a frozen corpse) Texan CEO of Mr. Meaty. They also have to deal with a roving gang of "Gangsta" kids, a group of Libbys named the Ashleys, and other general weirdness that pops into their store.

Take note of those quotation marks around the word "children's." Parents, this is a very oddball show.