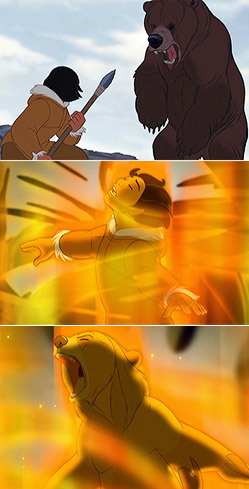 A bear killer's just desserts.
"One of you?! You would make me one of you? Filthy! Slimy! Freaks!"
— Cleopatra, Freaks
Advertisement:

A Karmic Transformation is when a character is transformed into something they hate (or at least something they think they're superior to). It can be either temporarily or permanently. It is either way ironic and often Anvilicious. The most popular version of this is perhaps that of a white racist turning black, followed closely in popularity by sexists becoming the opposite sex because these are easy targets. Then there is "the hunter becomes the hunted" plotlines where the hunter is completely or partly transformed into the animal they were hunting.

Note that this isn't always a good idea, especially if the character won't learn a lesson from it. If the transformed character figures out some way to make the transformation Cursed with Awesome, they may use their new abilities to exact a very unpleasant revenge on whoever transformed them.

The transformation can be made doubly maddening when the transformation is inflicted to save their life, as an Emergency Transformation. If the character continues to hate whatever it is that they were turned into, the situation might smack of Boomerang Bigotry.

A variation is when the character hates members of another group because he envies them, and resents the fact that they (supposedly) have it better than he does. In this case, the transformation will likely teach two lessons: to be sensitive about other people's problems and to be happy with who you are.

Color Me Black is a sub-trope of this. If the transformation is self-inflicted and not loathsome, that might be Black Like Me. Many consider this to be a Cool and Unusual Punishment, especially to the Broken Angel. See also: Karmic Death, In Another Man's Shoes, and Beauty to Beast.

Robyn starts out as an aspiring Wolf Hunter like her father, but ends up becoming a wolf walker after being bitten by Robyn. Over the course of the movie, she comes to embrace her new nature.

Robyn starts out as an aspiring Wolf Hunter like her father, but ends up becoming a wolf walker after being bitten by Robyn. Over the course of the movie, she comes to embrace her new nature.