Western Animation / Hercules and Xena  The Animated Movie: The Battle for Mount Olympus 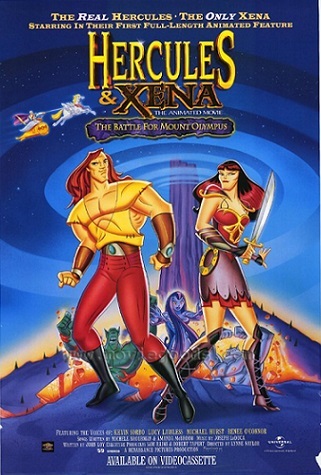 Hercules and Xena – The Animated Movie: The Battle for Mount Olympus is a 1998 Direct to Video animated film spun off from Hercules: The Legendary Journeys and Xena: Warrior Princess. With Kevin Sorbo, Lucy Lawless, Michael Hurst, Renee O'Connor, Kevin Smith (not that one), and Alexandra Tydings all returning to reprise their roles. It was directed by Lynne Naylor and written by John Loy and was Universal's first (and only direct-to-video) animated film to be rated PG by the MPAA.

When Zeus takes Alcmene (Hercules' mother) to Mount Olympus, Hera, tired of his constant infidelity, vows revenge on him and the other gods. She steals the Cronus Stone, the stone that keeps the Titans in the Underworld lava pits, and leads the gods' old enemies in a take over of Olympus. With the gods transformed into animals and Olympus under the control of Hera and the Titans, it's up to Hercules and Xena to defeat Hera and her monsters and save the world in the process.