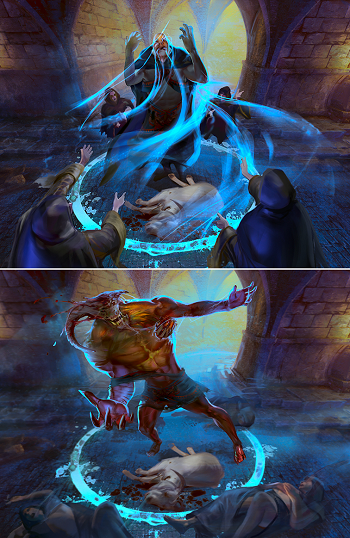 At last, a visage to match the growing horror within.
"At first, you'll be afraid. But don't worry. You're just becoming the monster you always were."
— Resident Evil 6
Advertisement:

Characters who decide to toboggan down The Dark Slide will have a fun time of it... at first. It starts small, maybe an Evil Makeover with Spikes of Villainy and Red Right Hand. But there's a nasty surprise at the bottom of this insidious slide; those who commit especially heinous crimes, abandon all of their humanity for power, or allow their inner darkness to bloom into a blight won't just grow tiny fangs or discover Evil Makes You Ugly, they'll find out Evil Makes You Monstrous.

This is usually a feature of legends, both in real life and in stories. Basically, a guy, gal or even animal becomes so mean, malicious, and generally Evil that they transcend their mortal existence and become a monster of legend. A scourge on man and beast. After killing enough, the Serial Killer goes from a man into a force of nature that just. Won't. Die. The witch buried in the heart of the woods will rise from her grave and haunt it as a half-dead corpse until her spellbook is destroyed. The man who killed and ate his family out of hunger transforms into a Wendigo. The Creepy Child everyone picks on lets the hatred fester and ferment until she becomes a living poltergeist. The devil worshipper so taints their souls that they transform into a demon.

Then again, the (mostly) innocent might suffer this fate because of a Curse or The Virus. In the most extreme cases the character will no longer be flesh and bone but Made of Evil. While it's unlikely the character wants to seek redemption, it's not impossible that a loved one from before the change can at least give them pause.

Can also be caused through The Power of Hate. See also/compare One-Winged Angel and Scaled Up. The Punishment is related, but the transformation into a monster is forced by an outside faction. Contrast Power-Upgrading Deformation, where monstrousness makes you powerful. Compare with Cute Is Evil where cuteness is the warning and Evil Tainted the Place, where a location becomes bad because of something that happened there. Contrast with Murder Into Malevolence wherein an innocent turns evil after a nasty demise.

Knuckle Joe still wants Kirby's blood despite Meta Knight proving that he didn't kill his father. He then becomes a reflection of what he will be while fighting Kirby.

Knuckle Joe still wants Kirby's blood despite Meta Knight proving that he didn't kill his father. He then becomes a reflection of what he will be while fighting Kirby.