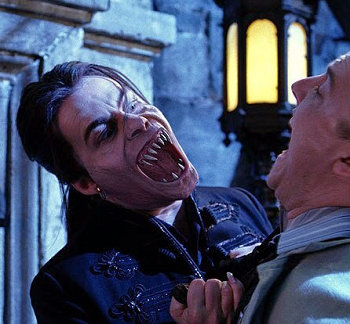 Can't get more evil than the Prince of Darkness himself.
"If you doubt your courage or your strength, come no further. For death awaits you all with nasty, big, pointy teeth!"
— Tim the Enchanter, Monty Python and the Holy Grail
Advertisement:

You know, fangs. Those pointy things that, whenever they're in the mouth of someone or something, usually indicate that they're probably evil and/or badass and probably looking for an excuse to bite you with them. They're usually paired with Femme Fatalons and Pointy Ears to create a predatory look, and they're pointy so very...very pointy! And really, what's the point in having pointy teeth if you don't do stuff with them like rip apart the flesh of the living? Opening beer cans for kicks? Removing the shrink wrap from DVD boxes?

Werewolves, vampires, and monsters in general make this trope very common. It indicates that the creature in question is probably predatory and that you have dropped a rung on the food chain. The prey animal instinct in us never fails to feel wary about teeth that look like weapons and writers have always known to make use of a Primal Fear. Of course, it helps that the canines were specifically evolved for ripping and tearing flesh.

For trope purposes, this includes fangs, tusks, and an entire jaw of purposely sharpened teeth. Snakes Are Evil may or may not involve this; not all snakes have fangs, but big fangs are associated with the vipers, dangerous and scary venomous snakes. Cute Little Fangs is usually the Good Counterpart to this trope, but the two can overlap if the writer is trying to invoke Cute Is Evil. May be paired with Horned Humanoid for a demonic look. Related to Scary Teeth. May also involve Phlegmings.