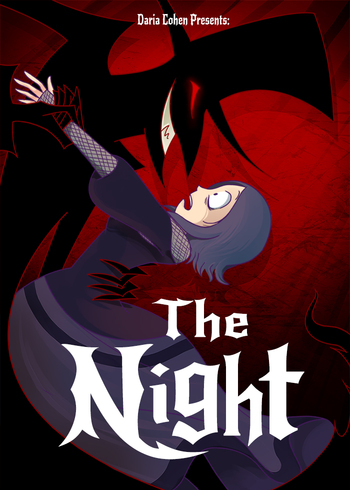 The Vampair is a Web Animation series made by Daria Cohen, beginning life as her final year film at Skenkar School of Design and Engineering. Centering around a young woman named Missi and a vampire lord known only as The Duke of Vaults, each episode explores their relationship and their backstories in the form of dark cabaret and electroswing music videos. The series can be viewed on her YouTube channel here

The first season consists of seven (and a half) episodes, which aired from 2016 to 2021. While looking for an interesting place to sit down and read, college student Missi enters a seemingly abandoned mansion only to find herself in a dangerous game of cat-and-mouse with the house's vampiric lord. After defeating him, Missi becomes corrupted by the power of his magical cane, turning into a vampire herself and being unwilling to give up her new powers. From then on, the two have an antagonistic back-and-forth, as Missi and the Duke try to best one another.

The second season, currently in progress, covers the Duke's backstory: from the death of his mother as a child to him eventually becoming the powerful vampire he is in the present day.

On November 4th, 2020, Dana released a Multiple Animators Project featuring Duke set to the tune of Voltaire's classic song "When You're Evil"

as a celebratory milestone for reaching 666K subscribers on YouTube, though this video is non-canon to the rest of the series.

Tropes that appear in these shorts: