Web Animation / There's a Man in the Woods 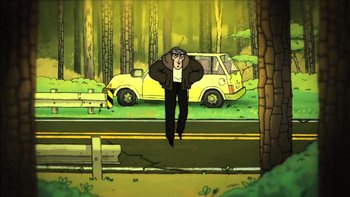 "There's a Man in the Woods" is a web animation made in 2014.
Advertisement:

The story is narrated by a former school teacher, who tells the audience the story of how he got fired. Every day, the children of the school would go out to the bushes at the edge of the woods near the school and eat the honeysuckle. One child named Sid, however, doesn't want to share the flowers, so he claims that he saw a man in the woods. The teacher knows that Sid is lying, but as he doesn't do anything except try to stop the rumor, the story grows before getting back to the parents. Things get darker from there...

The video can be found here:

There's A Man In The Woods contains examples of: