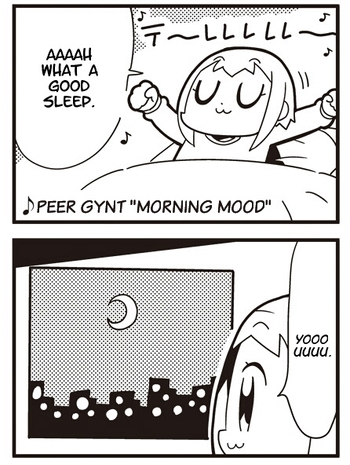 It didn't end well for the song caption.
"For there was light music. An orchestra of 'young and pretty girls all dressed in white blouses and navy-blue skirts'...had been formed from among the inmates. While the selections was being made for the gas chambers this unique ensemble played gay tunes from The Merry Widow and Tales of Hoffmann. Nothing solemn and somber from Beethoven. The death-marches at Auschwitz were sprightly and merry tunes, straight out Viennese and Parisian operetta."
— William L. Shirer, The Rise and Fall of the Third Reich
Advertisement:

So you're a big-time Hollywood director. Congrats on that, by the way. You've got a dynamite action movie you're about to start shooting. It won't win you an Oscar, but hey, you've got two of those, and any way, your mortgage payments are becoming somewhat uncomfortable. There's just one problem: the movie is supposed to end with a bloody firefight, and your stupid conscience is acting up again. You went to NYU, dammit, you can't just have 13 minutes of blood and bullets.

But wait. What if you overlay the horrific carnage with beautiful music? Then, you're not indulging your audience's bloodlust, you're making a deep philosophical point about the duality of human nature. What says, "Mankind is both glorious and murderous" better than a faceless mook getting shot in the head at close range while Schubert's "Ave Maria" plays in the background?

Soundtrack Dissonance is utilized to, in literary terms, pose a juxtaposition with the intent of making a thematic statement and/or widening our emotional distance to the events before us, thus allowing us to view the piece in a more removed, intellectual manner.

You're taking advantage of a tactic used countless times over the years to heighten the sadness of a scene. Your dissonant music doesn't have to be played over a violent scene, of course. Happy, upbeat music at a funeral of a beloved character can also work. It can be used to excellent effect, especially if the song is somewhat silly, but if you use "What a Wonderful World" or "You Are My Sunshine" be warned, examples of those have their own pages now.

Of course, it can work both ways as well. Inappropriate music can be often played for laughs; a sombre, portentous, important-sounding piece of music played over something utterly trivial happening on screen can increase the laughter. A light and cheery pop song or sweet love ballad playing over an otherwise tense scene can be played for laughter, especially if the tension comes from something absurd that the characters are otherwise treating entirely seriously. In addition, peppy music can be also played over a scene featuring otherwise horrific events as a form of Black Comedy, often giving the impression that the work itself is uncaring and nonchalant towards the suffering of the characters present, and it can make the scene in question hilarious in an especially horrible way if done right. But if you use "Yakety Sax", be warned...

The Ode To Joy choral in the fourth movement of Beethoven's Symphony No. 9 is especially cursed to suffer from Soundtrack Dissonance due to its notorious use in Third Reich propaganda, hence modern usage is just as often due to this association (or to the most well-known work to use it for Soundtrack Dissonance, A Clockwork Orange) as it is its original intent.More Probably much less so in Europe itself, since the tune (without lyrics) is as close to being European anthem

as it could get. To be absolutely clear, Friedrich von Schiller's original lyrics were about the equality of all humankind in the eyes of God: Joy, the bright spark of the gods/the daughter of Elysium ... All men now are brothers/beneath your gentle wing. The tune also has lyrics written as the hymn "Joyful, joyful": Joyful, joyful, we adore Thee/God of Glory, Lord of Love. More Leonard Bernstein specifically conducted the entire symphony in Berlin shortly after the Fall Of The Berlin Wall as a celebration, changing the word "freude" to "freheit" ("joy" to "freedom").

Pretty much any anime with a happy Ending Theme will achieve this trope with its first serious Cliffhanger, intentionally or otherwise. Same for a happy Opening Theme and any stressful teaser.

The entire process has been streamlined by the ability of some video game consoles to replace a game's soundtrack with anything the player cares to play. Try setting the most violent, obscene parts of Gears of War to "Yakety Sax" sometime; your parents will search your mattress for drugs, but you'll be enriched by the experience. Unless, you know, you actually have drugs stashed in your mattress. Speaking of video games, some video game developers have developed and implemented systems to try and avert this as much as possible; for more info see Variable Mix.

When this trope is done poorly it can easily turn a dramatic scene into Narm.

A subtrope of Mood Dissonance. Compare Ironic Nursery Tune (where a character is singing their favorite lullaby or nursery song), Creepy Children Singing (if it involves young children singing nursery rhymes in the background), Lyrical Dissonance (when the lyrics don't match with the music) and Wrong Song Gag (where the wrong song is played, often resulting in an in-universe example of this trope). Contrast Isn't It Ironic?.

Many of these musical pieces are Standard Snippets.

In film school this trope is called Counterpoint.

On the Internet, it has become a meme called Unfitting Music.