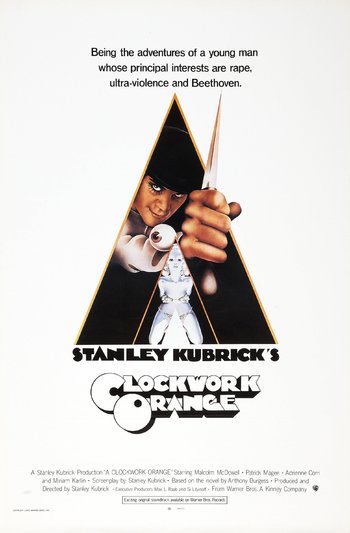 "This will sharpen you up and make you ready for a bit of the old ultraviolence."
"It's funny how the colours of the real world only seem really real when you viddy them on the screen."
— Alex
Advertisement:

A Clockwork Orange is a 1971 film by Stanley Kubrick based on the eponymous 1962 novella by Anthony Burgess.

In a dystopian alternate England where street crime is rampant and youths are uncontrollable, teenage delinquent Alex DeLarge (Malcolm McDowell) and his "Droogs" Dim, Georgie and Pete (Warren Clarke, James Marcus, Michael Tarn) prowl the night spreading terror and destruction wherever they go, just for kicks. By daybreak, Alex returns home to his vapid parents, who turn a blind eye to his activities, and enjoys his second favorite thing in the world: classical music, and that of Ludwig van Beethoven above all.

Following a treason by two of his gang's members that he put in their place earlier, Alex ends up in prison for his crime soon after. When he discovers that the government is planning to test an experimental treatment on a prisoner in exchange for freedom, Alex jumps at the opportunity — until the treatment turns out to be a nightmare and leaves him unable to defend himself. It gets worse when Alex, after being released from prison, keeps bumping into vengeful victims of his.

Among the elements that comprise the film's famously bleak tone is a soundtrack that incorporates a lot of Classical Music (a Kubrick habit), some of which was rearranged by Wendy Carlos on a Moog synthesizer.

Infamously, the film cuts out the epilogue that was present in the original version of the story due to it being removed from many editions of the book in its early international release. It involved major Character Development and something resembling a Happy Ending for Alex. Though Burgess apparently contacted Kubrick towards the end of production, the director preferred the ending that he had planned, claiming the original diluted the message in the story. Burgess remained unhappy about the film adaptation, and later re-released the novel with added commentary about its hermeneutics.

The film was accompanied by the pornographic animated short Kama Sutra Rides Again in theaters in the UK, on the personal selection of Kubrick himself. The film had a very troubled release in Spain, where it was banned by dictator Francisco Franco; a documentary on the subject, A Forbidden Orange, was released in 2021 on HBO Max, narrated by McDowell himself.

The Kubrick film adaptation ended up getting inducted into National Film Registry in 2020.

This film provides a bit of the old examples of: