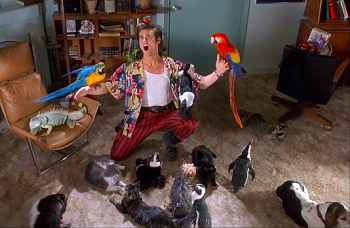 And there's no one more unusual than him.
On the other hoof, why did I have her for a best friend, anyway? I was a normal Gothamite, a fine, upstanding citizen. So were my parents. So was Bruce, after a fashion. But my best friend? She was a psychologist-turned-harlequin, had been disowned by her parents, almost died in an asylum, and she used to have pet hyenas.
— Psalm of the Lark
Advertisement:

In fiction, the type of pet a character owns is often used to signify their personality. Dogs are the default, cats are often used for introverts, and fish are usually only for young characters as their first pet (especially if they need to learn about death). So what of the other pets out there?

As a form of Animal Stereotype, less mainstream pets like rodents, reptiles, or ferrets tend to be owned by characters who are oddball, awkward, or loners. Reptiles and rats (though rarely mice) are often the go-to pet for villainous and malicious characters, while others tend to signify the owner is atypical. Exotic pets are almost never owned by an 'average' character. Large predators (like a Panthera Awesome) as pets often imply that the person is rich and/or powerful, if a bit eccentric.

Compare Heroes Love Dogs (for characterizing heroes/good guys), Crazy Cat Lady (an eccentric woman who hoards cats as her pets), Right-Hand Cat (the odd fondness of villainous characters for cats), Right-Hand Attack Dog (the dogs' strong association with villains as active fighting partners), Familiar (the association of cats or other odd animals as magical companions for witches), and Cool Pet.