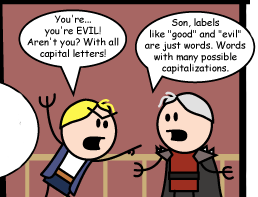 "Lord Voldemort showed me the truth. There is no good and evil, there is only power, and those too weak to seek it."
— Professor Quirrell, Harry Potter and the Philosopher's Stone
Advertisement:

When called to the carpet for their nefarious actions by the heroes, certain villains will pull the Moral Relativism card and ask some form of this Armor-Piercing Question. After all, if they don't subscribe to the same moral compass as the protagonist, and too many people in everyday life have come to use such loaded terms like "evil", "an abomination", and "Hitler/Nazi/Fascist" to simply mean "scary" or "anything I don't like", who's to say which one of them is really the bad guy?

Characters have all sorts of reasons for bringing up the subjectivity of morality - perhaps they are the Constantly Curious Philosopher who wants to get to the bottom of things; perhaps they are The Fettered, acutely aware of the difficulty and complexity of their quest, moral hazards included; and then perhaps they are trying to fundamentally shake some kind of hero who believes themselves to be acting in the name of absolute good. This last flavor is by far the most common, and is a favorite tactic of the Straw Nihilist, the Card-Carrying Villain, The Unfettered, and Übermensch who adheres to Blue-and-Orange Morality and believes himself Above Good and Evil.

On the surface at least, "What is Evil" is a stressingly valid point. Philosophers of morality have, for centuries, struggled with the apparently impossible challenge of objectively proving a "should"

, even as most of us deeply believe that, say, murdering innocent children is objectively wrong. Typically, heroes tend to cling to that exact deep conviction; they don't care for arguing about moral relativism, much like real-life people who see themselves as morally in the right don't care for it. You could say that this has resulted from aeons of evolutionary pressure on heroes: the ones who stopped to think out the moral conundrums got killed by the Card-Carrying Villain who realized they could use this to Logic Bomb heroes. Meanwhile, the heroes who refused to give in to the villain's nihilism, either out of boneheadedness, or out of a belief that fighting for what you believe in is a worthy enough goal, persevered. Out-of-universe, the typical lack of moral ambiguity in hero/villain conflict may be attributable to writers just not wanting to waste any effort on that issue, for either ideological or pragmatic reasons.

See also Hannibal Lecture, Well-Intentioned Extremist, Tautological Templar, Written by the Winners, The Golden Rule, and Not So Similar. Frequently combined with Above Good and Evil and (for the illogical) Bad is Good and Good is Bad.