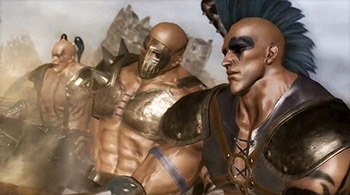 Even After the End, hairstylists still managed to make out like bandits.
Mr. Krabs: Welcome to the Apocalypse, Mr. Squidward. I hope you like leather.
Squidward: I prefer suede.
—The SpongeBob Movie: Sponge out of Water
Advertisement:

Do we really have to Describe The Apunkalypse Here? Can't we all just get Beyond Thunderdome?

Societies collapse. This is a law of nature.

In fact, according to this trope, it seems all societies degenerate into lawlessness with punks and other toughs roaming the streets (or waves; thank you, Kevin Costner) and doing naughty things After the End of civilization.

This degeneracy is part and parcel of The Apunkalypse. Effectively, this trope says that one of two things happens:

This state of affairs only goes on so long as nobody decides they have had enough or nobody gets volunteered to fix it. But it may be a while before either happens, since the Apunkalypse is just another day in the neighborhood.

This generally falls within the bounds of dystopic worlds, post-apocalyptic worlds, crapsack worlds, and various punk genres. While this trope may overlap with others such as Desert Punk (specific to deserts and wastelands, on or off-world, with or sometimes without a proper apocalypse), it deals with the sociology of the apocalypse (a general agreement on fashion choices and anarchic, punkish, tribal governance) more so than the landscape of the apocalypse. The Apunkalypse befalls Big Cities and societies riding the waves just as surely as it does those cowering in the Ragnarok-proof ruins of a bygone era or those walking the face of a scorched Earth.

If there was in fact a major disaster or production breakdown to the point that nothing new is being produced (food, clothing, machinery, etc.) or the Apunkalypse has gone on long enough that everyone has forgotten how to produce things, people may become Disaster Scavengers in a Scavenger World. If so, Post-Apunkalyptic Armor may be all that's available to the goodies or the baddies for protection (typically consisting of, though not necessarily limited to, things like motorcycle helmets, football shoulder pads, baseball catcher padding on the front, soccer shin guards, or other items resourcefully scavenged or bartered for and a few feathery adornments complete the ensemble).

A staple setting for Beat 'em Up games from early to mid 90s is a Wretched Hive city infested with armies of punks sponsored by supervillain-esque crime bosses. While society has not collapsed per se, Police Are Useless and it's highly dangerous for a civilian to ever step outdoors — that is, until the heroes arrive to restore order.

Mad Max is the Trope Codifier, so expect a lot of works that employ the use of this trope to give it a shoutout.

This should not be confused with the 2006 album The Arockalypse released by Finnish hard rock band Lordi. Contrast Cosy Catastrophe.

Scene from the 2019 film, Lego Movie 2 The Second Part. Five years past from the start of the film and, due to constant attacks from the Duplo aliens, Bricksberg has fallen into a post apocalyptic state where everyone is now grunge-y, sport cynical and tough demeanors and just overall accept the bleak nature of things. Well... almost everyone.

Scene from the 2019 film, Lego Movie 2 The Second Part. Five years past from the start of the film and, due to constant attacks from the Duplo aliens, Bricksberg has fallen into a post apocalyptic state where everyone is now grunge-y, sport cynical and tough demeanors and just overall accept the bleak nature of things. Well... almost everyone.