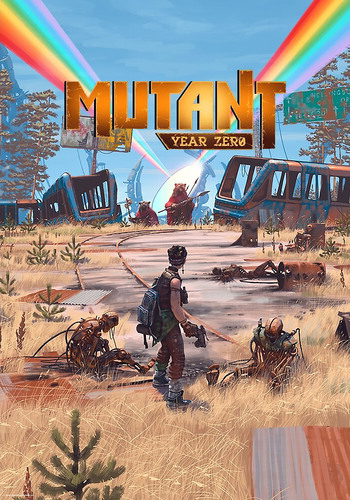 Roleplaying at the End of Days
"How did the world end? Some Stalkers and other braggarts say they know what happened. That a great plague swept the world and killed everyone. That the bosses of the Old Age fired their weapons of mass destruction at each other and drowned the world in flames. That the gods among the stars, the Ancients’ overlords, had enough of mankind’s hubris and decided to end it all in fire and brimstone. Maybe it’s true, maybe it’s just lies and tall tales. The truth is, no one knows for sure. Except maybe the Elder. And he refuses to talk about it. We learned as children not to ask, he would curse and rave at us every time the subject came up. But I’ve heard him mumble in his sleep. He said that the Ancients ended themselves."
— Hanneth, Chronicler
Advertisement:

Mutant: År Noll, otherwise called Mutant: Year Zero in English speaking regions, is the current iteration of the Mutant tabletop RPG series that's been popular in Sweden since the 80's, published by Free League Publishing and Modiphius Entertainment. It's a post-apocalyptic RPG set a few decades after the end of the world, where you and others get to play as a race of super-powered mutants. All of whom are attempting to rebuild their sanctuary, 'The Ark', and survive in the hostile 'Zone' outside The Ark's protection and within The Dawnworld's clutches. Unlike Mutant UA and Mutant Chronicles which took the ideas of the series in vastly different directions; Mutant: Year Zero attempts to remain as close and as faithful as it possibly can to the original premise of the series that was established back in 1984. This includes building off of a more traditional Mad Max-inspired world and setting as opposed to a Warhammer 40,000 clone or Victorian-esque sci-fi setting. This RPG is the originator of the Year Zero Engine, that's also used in Coriolis The Third Horizon, Forbidden Lands, Vaesen Nordic Horror Roleplaying, Alien: The Roleplaying Game and the recently updated edition for Twilight: 2000.

Mutant: Year Zero has several additional Sourcebooks and nine Supplements which act as their own separate adventures, whilst the three sourcebooks adventures occur tangentially to the Core Rulebook. The core rulebook has players take on the roles of Mutants, the People, attempting to find "Eden" and find a cure for their barrenness. The People cannot have children, and it's only a matter of time before they die out. The People are only made up of around two hundred Mutants all together with a slowly diminishing population, that shrinks at the end of every session depending on the result of a six-sided dice. "Eden" is their only hope if they wish to survive and continue their culture and legacy in the "Zone". The first sourcebook is called Genlab Alpha, with the players taking on the roles of Mutated Animals. Unlike the human Mutants, the Animals aren't barren and have been steadily growing their population since the end of the world. But they've all been trapped in an enclosure called Paradise Valley, which is controlled by The Watchers that act as the Animals' ruthless jailers. The goal of the book is for the players to build a Resistance Force against their oppressors and escape Paradise.

The second sourcebook is called Mechatron, and has the players take the role of newly sapient Robots experiencing freedom and independent thought from the Collective that is controlled by the Overarching A.I. NODOS. The Robots adapt to any and all situations they encounter and can potentially live on forever, and because of this they have adapted and learnt to question their existence which has given them the ability to gain self awareness in the time since the end of the world. Mechatron is set in a self-producing facility deep underwater called Mechatron-7. Players are assigned to the Error Elimination Unit, with the mission of investigating Mechatron-7's robotic denizens in the hope of learning and solving it's issues. Since gaining sentience, the Robots have become aware of their environment and learnt that Mechatron-7 is falling into ruin. Their programming originally blinded them to this reality, but now the veil has been lifted and Mechatron-7 is dying. The Robots must fight for whatever resources remain so that they and Mechatron-7 will survive.

The third sourcebook is called Elysium and has the players play as the Heir to one of the Four Titan Houses for ten-thousand of the last remaining humans living deep underneath Earth in Elysium-I. Before the end of the World, a powerful covenant of Four Houses built dozens of Enclaves across the world, in the hopes of ensuring humanity's survival after the end. These Enclaves were built in veneration of the late 19th century, where the woes and conflicts of the 20th and 21st centuries were forgotten and never to be repeated again. Unfortunately these Enclaves began a devastating war against one another soon after the end of the world, with only Elysium-I being the last reaming Enclave. The Four Houses attempted to isolate Elysium-I and its citizens from the rest of the world, by imposing draconian law and quelling dissidents. This has grown heavy animosity against the Four Houses with the lower classes and may result in a civil war that Elysium-I can't survive; that's where the players come in, they are assigned as Judicators from their chosen House. Assigned as Elysium-I's Law Enforcement, concived to maintain the fickle order of the Enclave and to squash the growing rebellion amongst the Elysium-I masses. All this whilst the PCs secretly secure their own House's power over the Enclave.

The fourth (and theoretically final) sourcebook is the upcoming Ad Astra, about the Titan Powers who escaped into Earth's orbit and survive on dotted space stations far removed from the decaying surface. No release date is yet known for this book.