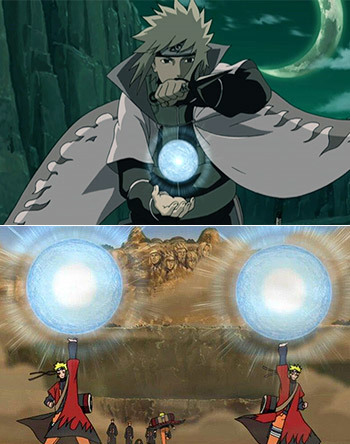 Above: Old and Busted
Below: New Hotness
"While it's true that my work is based on you,
I'm a supercomputer. You're like a TI-82!"
— Stephen Hawking to Albert Einstein, Epic Rap Battles of History
Advertisement:

A fictional phenomenon where a younger generation, a younger sibling, or some other form of successor proves to be smarter, more capable, or much more powerful than the preceding generation.

This can be used in several ways:

The easiest explanation is that the new person is better talented. Another is that they're able to approach old problems with new ideas and/or a fresh perspective. Perhaps the older generation specifically raised the new generation to surpass them (or to bring hope where they'd failed). Maybe the old generation just ran out of time.

Another explanation is that advancement doesn't need to be linear. It can be geometric or exponential, and when a sufficiently powerful discovery or achievement is made, it automatically boosts what comes after. For example, every single person reading this has likely surpassed the geniuses that discovered fire and the wheel.

Do not confuse for Replacement Mooks or cases where someone or something inadequate was swapped out for something better. Making machines more powerful or capable than the last, or replacing someone or something that was a failure, makes sense. What makes this phenomenon notable is that there's a smidge of uncertainty. At least ONE person (the predecessor or successor) has to achieve their talent. If the predecessor was manufactured or cultivated, the successor needs to achieve it, or vice-versa.

Contrast Super Prototype, Lost Technology, Ancient Astronauts and Stronger with Age. The polar opposite of Sketchy Successor and Inadequate Inheritor. Sucksessor is a subversion.

Quite often a staple in Shounen action Manga/Anime series and SuperHero Comic Books. Is quite common in cases of a "Well Done, Son!" Guy.

Thanks to Mythology, this trope also happens to be Older Than Dirt.