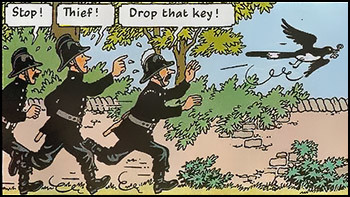 "Other birds collect twigs for their nests. Magpies steal jewels for theirs."
— Flavor Text for Thieving Magpie, Magic: The Gathering
Advertisement:

An Animal Stereotype: Magpies (and by extension other corvids such as ravens and crows) have a compulsion to steal, particularly in regard to shiny things. A common plot is for something to go missing, accusations of theft to be thrown around at everyone in sight, and the magpie to be revealed as the culprit at the last minute.

This stereotype is based on the commonly held (though actually false) belief that magpies collect shiny objects to line their nests in order to attract a mate. What is true, however, is that magpies and other corvids are intelligent animals with an innate sense of curiosity, and they may carry off unfamiliar objects such as jewelry simply to examine them more closely. So it's easy to see how people might think this was like a small-scale version of a Dragon Hoard.

This stereotype has also provided a handy Animal Motif for the occasional fictional jewel thief (for when cats are too much of a cliché).

See also Magpies as Portents, which is about the association of certain numbers of magpies with bad (or sometimes good) luck and the rituals for warding the bad luck off. See Penny-Pinching Crab for more greedy animals.