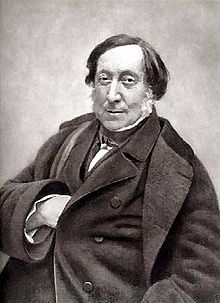 Basically, you know a lot of Rossini's overtures (especially if you've seen A Clockwork Orange), which all share a similar structure. Chances are you don't know anything about what goes after. According to legend, Rossini was also known for being very lazy: he was lying on his bed to write, and when a piece of paper was falling, he started again from the beginning so he wouldn't have to move.

He was a noted procrastinator: he claimed to have composed The Barber of Seville in only 12 days, and to have written the famous "William Tell Overture" a few hours before the opera opened. Finally, once he'd written enough to make himself rich, he went into semi-retirement: he stopped writing operas entirely, and only composed the occasional cantata or other bit of short vocal music. The rest of his time he parlayed into his greatest passion: food. He was reportedly quite the gourmet and chef.

There have been some biopics about him, the most notable being 1991's Rossini! Rossini! by Mario Monicelli, with Philippe Noiret in the main role.