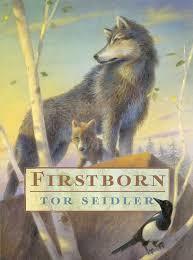 Firstborn is a xenofiction children's novel by Tor Seidler. It stars a magpie named Maggie as she goes through life.

Maggie is an unusual magpie who is more inquisitive and intelligent than what is common for her species. Maggie isn't interested in the "normal" magpie life of having children and collecting trinkets. When she ends up befriending a crow, her world is suddenly opened up. Maggie decides to leave her mate and see beyond her birthplace. Along the way, Maggie befriends a large wolf named "Blue Boy". Blue Boy lets Maggie tagalong with him as he escapes from captivity.

Though Maggie is the protagonist and the book is from her POV, the real stars are the wolves. Blue Boy ends up the leader of a wolf pack that the story focuses on. Blue Boy's oldest child, Lamar, is a central character, however he doesn't appear until several chapters in. Firstborn mainly follows Blue Boy and Lamar through Maggie's eyes.