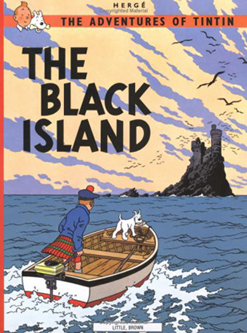 While taking a walk in the countryside, Tintin comes across a plane with no registration number making an emergency landing. When he approaches the plane, the pilots shoot him and take off. As Tintin is hospitalized, he learns that an unregistered plane has crash-landed in Sussex, England, which prompts him to leave the hospital and go on an investigation.

On the way to Sussex, Tintin is framed for assault and robbery by the villainous Puschov, which means that while he investigates the crash landing, he has (for the third and final time in the series) to evade Thomson and Thompson, who are intent on arresting him. Tintin eventually discovers that he has stumbled onto a delivery system used by a gang of money counterfeiters with a hidden base of operations on the titular Black Island.