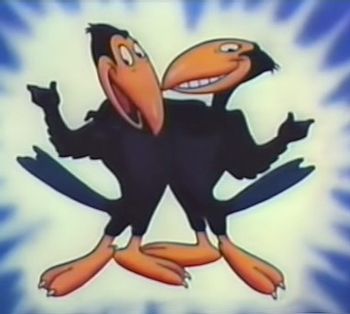 A classic series of Terrytoons cartoons, starring two identical wisecracking magpies, Heckle and Jeckle. One has a British accent, the other a New York one, and they are fast friends who are able to overcome foes by outwitting them, breaking the rules, and generally having fun at other people's expense.

Many characters on other shows are known to enjoy watching Heckle and Jeckle, including Fonzie, Lenny and Squiggy, and Jack, while imprisoned by the Others.