Freudian Excuse Is No Excuse 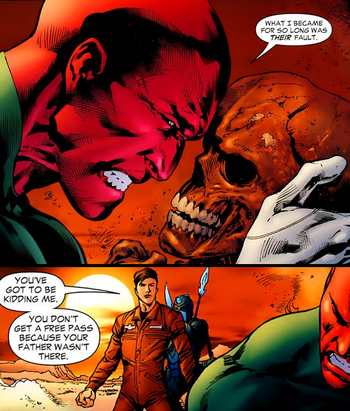 "You are all the things that are wrong with you. It's not the alcohol, or the drugs, or any of the shitty things that happened to you in your career or when you were a kid, it's you! Alright? It's you."
— Todd to BoJack, BoJack Horseman
Advertisement:

This trope is a standard Deconstruction of the Freudian Excuse. Sometimes, characters that have gone through something horrible believe that they have the moral high ground or that they are in the right for their actions, no matter how evil they are or who the targets are. This trope comes into play when a character (possibly even the character with the excuse themselves, if they're going through Character Development) acknowledges that their actions are wrong; no matter what they have been put through, one bad action won't justify another. In essence, this is the sum of two Stock Aesops: "take responsibility for your actions" and "two wrongs don't make a right".

This trope only happens when there's an In-Universe acknowledgment of this. A character has to receive a "The Reason You Suck" Speech, a Kirk Summation, see that someone's Disappointed by the Motive, or some other kind of speech on why they're wrong. Whoever gives the rebuke, there needs to be a voiced acknowledgment that the character's past doesn't justify their current actions. At the very least, an explicit statement must be made by the omniscient Narrator. One way to accomplish this is a small round of Misery Poker, specifically by pointing out others who have suffered just the same, if not more, and still chose not to commit the same misdeeds as the accused. (Bonus points if that very suffering is caused, directly or otherwise, by the accused's wrongdoings.)

Note: This trope does not necessarily prevent Forgiveness and redemption; it just states that evil acts are not justified. In many cases both in Real Life and in fiction, what's actually needed is a Heel–Face Turn and atonement, and for the villain to stop hiding behind their Dark and Troubled Past.

Related to Freudian Excuse and Dark and Troubled Past. Often present if a character is He Who Fights Monsters, a Troubled Abuser, or another link in The Chain of Harm. Can be utilized in the trope Calling the Old Man Out where the child calls out an Abusive Parent for using their harsh upbringing as an excuse to abuse them. Typically on the "Firm Hand" side of Gentle Touch vs. Firm Hand. Compare Kirk Summation, Playing the Victim Card, and Shut Up, Hannibal!. For similar fan reactions, see Unintentionally Unsympathetic.

Compare Freudian Excuse Denial, when the character themselves disputes that their past is what motivates them in the present. Compare and contrast Revenge Is Not Justice, when someone wants revenge for an injustice but is told that they have no right to hurt others and it won't bring any justice. Also see You Keep Telling Yourself That. Vigilante Injustice also comes into play when a vigilante uses their abusive childhood an execute for fighting the villain.

In-Universe Examples Only. You may be looking for Unintentionally Unsympathetic: