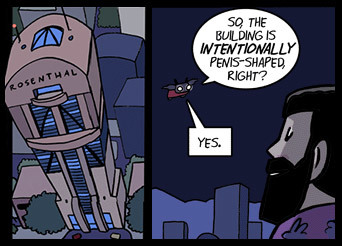 Our architect doesn't dick around.
"It may interest you to know, fräulein, that the carrot and the cucumber are both very powerful sexuality symbols. They represent the masculine phallic member. And you are vishing either to chop it up or to pickle it!"
— Sigmund Freud, according to My Uncle Oswald
Advertisement:

When characters in story think that any kind of long thin shape is a symbolic penis, or that any hole that is oval is a symbolic vagina, you've got Freud Was Right in play. Obsession with sex is one of the core aspects of this trope when it's lampshaded.

The truth is that All Men Are Perverts and All Women Are Lustful, but they are too ashamed of it. Thus, they express it in covert sexual symbolism and repressed desire everywhere, every time, with everybody. Not only is everyone Jesus in purgatory — everything is about sex.

The Trope Namer is Dr. Sigmund Freud, a Viennese doctor who proposed a theory of human behavior and development based on the idea that all our behaviours are ultimately expressions of instinctual, biological desires. Like, for instance, sex.

Some say Freud was right about something else, too. Not to be confused with All Psychology Is Freudian and Everybody Has Lots of Sex.