Gold and White Are Divine 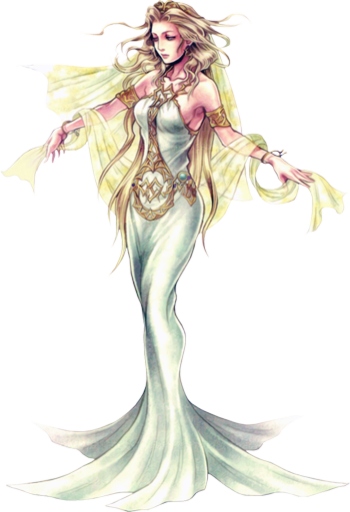 Your Big Good for the game, and dresses the part.
Advertisement:

In many western and European societies, the colors gold and white are associated with goodness and divinity. White and gold invoke images of Heaven and angels, and embody purity and incorruptibility. White shines brighter than any other light, and in modern times we know it to be a pure combination of all other shades, while gold never tarnishes, rusts, or corrodes; is associated with the sun; and of course is one of the most valuable minerals on Earth, especially in ancient times. The color white is also associated with the other big precious metal, silver.

Thus in works of media, you're likely to see divine beings clad in white and gold. As white and gold can represent the sky as part of their association with Heaven, blue may also be featured. The deities may be associated with the colors beyond clothing, and thus have silver/white or golden hair, with pale or bronze skin. Even with gods that are not good, the colors still reflect their divinity. The colors may also feature on their relics. Mortals who are connected to the gods, or wish to appear as divine figures, will also wear white and gold.

A Sub-Trope of Good Colors, Evil Colors and Color-Coded for Your Convenience.

Compare Color-Coded Patrician, Light Is Good, Light Is Not Good, Ethereal White Dress, Gold-Colored Superiority, Golden Super Mode, Heavenly Blue. Contrast White and Red and Eerie All Over, Red and Black and Evil All Over, Evil Wears Black, Villain in a White Suit.