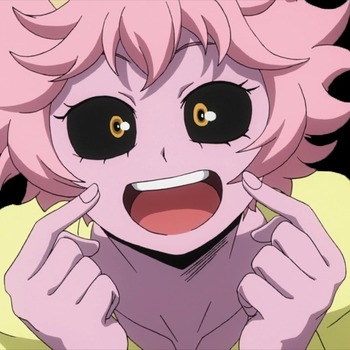 A cheerful character wears (or is) pink to signify their cheerfulness and optimism.

A cheerful character can be a Genki Girl, a Cloudcuckoolander, The Pollyanna, The Pink Heroine, a Cheerful Child, a Cherry Blossom Girl, a Perky Female Minion or any kind of cheerful character. If they have pink hair, they're the Sub-Trope, Rose-Haired Sweetie.

This is technically done mostly by women, but it also can be done by guys (often a very perky gay guy).

Rule of Symbolism can sometimes apply unless the character consciously chooses pink a lot.

Also, when Princesses Prefer Pink, their personalities are more than likely to be sweet and happy.