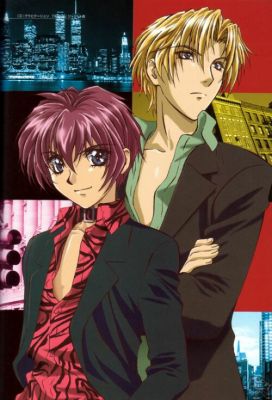 "Love, the one force that simply won't be denied!"
Advertisement:

Gravitation, created by Maki Murakami, is a Boys Love manga that ran from 1996 to 2002 in the shoujo magazine Kimi to Boku. For many years it was known as one of the few mainstream BL manga and anime series out there, partly because of the non-explicit nature of the romance between the two main male characters, and also because it had an actual plot to it instead of the Plot? What Plot? typical of many BL series at the time.

Shuichi Shindou wants, above all, to find success as a singer in his band Bad Luck along with his best friend Hiro. But life has something else in store for him: While walking through a park at night, the song lyrics he had been working on are blown out of his hand, and picked up by a tall, blond, and snarky stranger who mercilessly criticizes them. A hurt Shuichi is determined to track down the stranger (later found to be famous romance novelist Yuki Eiri) and demand an apology. But wouldn't you know it, he finds himself being strangely attracted to him by that unstoppable force called gravitation...

The rest of the series is about Bad Luck's rise to fame and the development of the rocky relationship between hyper Shuichi and emotionally cold Yuki who has a dark past of his own. They break up and get back together as the series continually seesaws between angst and comedy, but the gravitational pull of love keeps them together in the end, in spite of, or maybe because of, their vastly different personalities.

Gravitation was first adapted into a two episode OVA series in 1999, and then later remade into a 13 episode anime series that aired from 2000 to 2001. The anime somehow managed to pack the comedy, drama, romance, and music in equal spades without compromising the strength of any one. It became popular enough that many non-BL lovers have enjoyed it for its other qualities.

Not to be confused with Gravion, nor with a famous textbook on General Relativity by Misner, Thorne, and Wheeler, nor with Jason Rohrer's videogame.