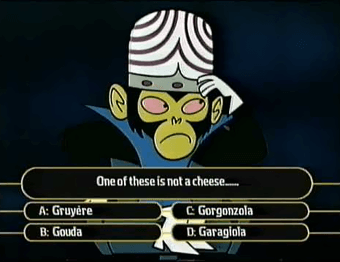 The answer is D, for those wondering.note "Garagiola" is the name of a famous baseball player.
Advertisement:

Characters appear on a real or fictitious Game Show, but typically they won't win any significant amount of money. Often, two or more characters will be pitted against each other, despite the unlikelihood of two people who know each other being competitors on a real game show.

If a group of people love a game show with one holdout pointing out the show's silliness, chances are the holdout will be the one who becomes a contestant and/or gets obsessed.

Compare "Jeopardy!" Intelligence Test, where the characters reveal their knowledge or lack thereof by their reactions to watching a game show. Talk Show Appearance is this tropes talk show equivalent.

open/close all folders
American Gladiators
Beat The Clock
Big Brother
Advertisement:
Bumper Stumpers
Cash Cab
Countdown
The Dating Game
Deal Or No Deal
Dragons' Den
Family Feud
(Las Vegas) Gambit/Catch 21
The Gong Show
The Hollywood Squares
I've Got A Secret
Jeopardy!
Legends of the Hidden Temple
Let's Make A Deal
Love Connection
Masquerade Party
Match Game
Name That Tune
The Newlywed Game
Password
Pointless
Press Your Luck
The Price Is Right
Pyramid
Shark Tank
The $64, 000 Question
Skatoony
Studs
Supermarket Sweep
To Tell The Truth
Truth or Consequences
University Challenge
The Weakest Link
What's My Line?
Wheel of Fortune
Who Wants To Be A Millionaire?
The Who, What or Where Game
You Bet Your Life