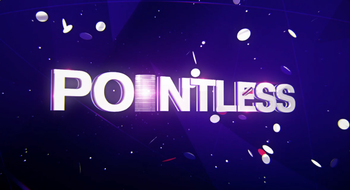 The Points Mean Nothing taken to its logical endpoint.
Advertisement:

A game show broadcast on BBC One (with reruns on Challenge TV), hosted by Alexander Armstrong (of The Armstrong and Miller Show), with Richard Osman as assistant. It has been broadcast since 24 August 2009, making it a Long Runner. In 2022 Osman announced he would be stepping down due to other commitments, with his final episode scheduled for broadcast on 20 July 2022; he will initially be replaced by a series of guest assistants, starting with Sally Lindsay

The object of the game is to score as few points as possible by giving correct but obscure answers to survey questions that were asked of the public. The most desirable answers are the "pointless" ones - correct, but not given by any of the survey participants. It works like a reverse version of Family Fortunesnote The show called Family Feud in America. right down to asking the questions to 100 people: "We gave 100 people 100 seconds to name..." Each pointless answer given during the main game adds to a cash jackpot, and the last team standing has three chances to win it by giving a pointless answer in the final round.

An Australian version, hosted by Mark Humphries and Dr. Andrew Rochford, began airing on Network Ten in July 2018, but it was cancelled after nine months due to low ratings.