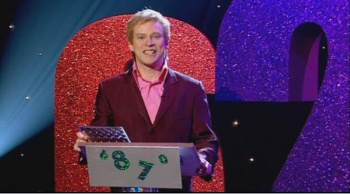 The visible front end of any Game Show. This is the person who moderates the show and actually runs the game; s/he also enforces the rules (though s/he usually has to defer to off-screen officials for any close judgment calls), engages in small talk with the guests, and keeps the mood light and fun.

Game Show Hosts are popular butts of jokes in fiction. This may have something to do with their need to maintain a jovial atmosphere as previously stated, even when contestants are losing, which might make them seem aloof; or maybe they just come across as slimy and slick, like common depictions of a used car salesman. For whatever reason, fictional game show hosts are often presented as smarmy, obnoxious, untrustworthy opportunists who seem to revel in the misfortune of contestants (a Dead Unicorn Trope, of course). Also, since quiz show hosts know, by necessity, the answer to each question (at least in theory; there are some game shows, like Family Feud and Card Sharks, that don't list the answers on the card), they tend to come off as condescending — perhaps unintentionally, but nonetheless. They also tend to be almost exclusively male; women on a game show's staff are more likely to be lovely assistants.

Despite their reputation, some hosts become legendary if they have a specific gimmick to them, or they end up coming off as sincerely wanting a contestant to win big. Since, in most instances, it's not his money he's giving away, the host is more or less rooting for the contestant, even if it's only in the back of his mind. To some hardcore game show fanatics, the skills of the host (and his sincerity) can make or break a show's success, and they seem to be right: Some of the more successful game shows are known in part for how the host carried the show along.

There has been a recent (not new) trend, at least for high-profile American programs, to cast has-been D-listers and comedians as Game Show Hosts.

The famous and talented host of Shy Guys Finish Last.

The famous and talented host of Shy Guys Finish Last.