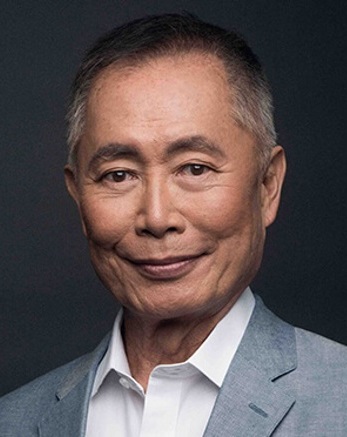 It's okay to be Takei!
"Oh myyy!"
Advertisement:

George Hosato Takei was born on April 20, 1937, in Los Angeles, California. During his childhood, he and his family were sent to World War II incarceration camps for Japanese Americans. It was a miserable time, but at least George was too young to understand that and was content enough under the circumstances. It was there that young Takei's desire to act was born: the camp would screen Japanese movies for the internees, and there would be a single man off to the side of the projection screen, called in Japan a Benshi, providing an English dubbed voice for all the characters. Takei wanted to be that guy. You can read about his experiences in the graphic autobiography he wrote on it, They Called Us Enemy

Returning to Los Angeles after this, Takei and his family endured residual hatred for Japanese-Americans that lingered after World War II; they also moved into a primarily Latino neighborhood, where Takei picked up fluency in Spanish. He would go on to minor in Latino studies in college.

In the 1960s he made appearances on shows like Mission: Impossible and The Twilight Zone, and he got some movie parts (Walk, Don't Run). But it was his groundbreaking role as Hikaru Sulu on Star Trek that made him a cultural icon, as one of the first and only non-stereotypical Asian characters on mainstream American television. Reportedly every Asian-American actor wanted the role, since Sulu had no accent, didn't do (Asian) martial arts,note Sulu had an interest in fencing, which may or may not be considered a martial art (depending on whether he did sport fencing or historical European fencing or both), but no matter what, fencing definitely isn't Asian. and was not a crude caricature (remember: this was more or less contemporary with the yellowface characters in Breakfast at Tiffany's and Charlie Chan).

However, when Takei took some time off to appear in the John Wayne film, The Green Berets, prepared 2nd season Trek plots that would have featured Sulu were reworked to put the new character, Pavel Chekov, in that spotlight. That was initially a cause for some friction for Takei with the new castmember, Walter Koenig, but they soon settled their differences and became close friends as their characters became an iconic pair at the helm of the USS Enterprise.

Takei campaigned heavily to helm a TOS-era spinoff, Excelsior (named after Sulu's own Excelsior-class starship), but 'twas not to be. However, he would go on to portray Sulu in Star Trek: The Animated Series, in six subsequent Star Trek movies, and led the Excelsior into action in Star Trek's 30th Anniversary special, "Flashback" (Star Trek: Voyager). He also co-starred in an episode of the fan work Star Trek: New Voyages.

After Star Trek, he ran for City Council in Los Angeles, losing by only about 1500 votes.note In one of those odd circumstances, the race that led stations in the area that were planning to air reruns of Star Trek or episodes of The Animated Series to delay the airing so as not to fall afoul of the Fairness Doctrine, on the grounds that Takei's appearance and especially his voice were simply too recognizable not to have an impact. However, his civic hopes were not in vain, as he would later be appointed to the board of directors of the Southern California Rapid Transit District. He also took part in the political crusade to hold America to account for the state-sponsored repressions of World War II, leading to an official apology and monetary compensation.

In the 2000s, Takei gained new fame by appearing regularly on The Howard Stern Show, giving birth to his own Memetic Mutation: "Ohhhhhh myyyyyy." He also appeared as Hiro's dad on Heroes and voiced animated Asian characters such as the Fa ancestor from Mulan, a Fire nation jailor in Avatar: The Last Airbender, and Emperor Yoshiro, leader of the Empire of the Rising Sun in Command & Conquer: Red Alert 3, where he gave us this lovely bit of

Memetic Mutation. He voiced Separatist general Lok Durd in an episode of Star Wars: The Clone Wars, making him one of the first actors to have a role in both of the two largest "Star" franchises. He has played two mentorial roles in the Transformers franchise, first as Master Yoketron, Prowl's cyber-ninja mentor from Transformers: Animated, and Optimus Prime's mentor, the archivist Alpha Trion in Transformers: Prime. Oh, and he also voiced Galactus, the Devourer of Worlds himself, in The Super Hero Squad Show.

In 2006, he officially came out of the closet as a gay man, although many of his friends, family, and coworkers had long known this (for instance, by their account, pretty much the entire cast of Star Trek knew or at least strongly suspected, but never said anything). In 2008, he married his partner of twenty years, journalist Brad Altman. Takei continues to be an advocate for civil rights, gay rights and Asian-American issuesnote Who finds President Donald Trump's treatment of Islamic and Latin-American populations all too familiar. In 2012, he starred in the musical Allegiance, which deals with World War II incarceration of Japanese Americans. He has also protested the Race Lifting of Asian characters in Hollywood adaptations such as The Last Airbender and AKIRA.

He has a huge Facebook following. By March 2012, his page had nearly 1.4 million

followers. The page surpassed 5 million followers late in 2013. By mid 2018 he'd doubled that to over 10 million followers. He has been a semi-cast member of The Howard Stern Show since the show's move to satellite in 2005, officially the show's announcer and sits in for week-long stints when he's in New York.

In 2015, Allegiance opened on Broadway with Takei in the dual role of the present day Sam Kimura and "Ojii-san" (Grandfather) in the flashback to the 1940s.

In 2020, Takei lent his voice to Masumi Arakawa in

Yakuza: Like a Dragon, the first game in Sega's venerated Yakuza series to have English voice acting since the 2006 original.