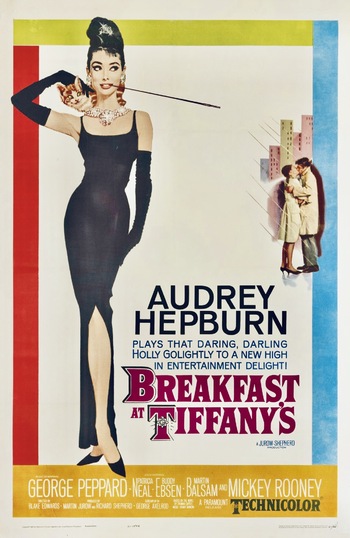 Name a more iconic actress + dress pairing.
Go ahead, we're waiting.
"If I could find a real-life place that made me feel like Tiffany's, then I'd buy some furniture and give the cat a name."
— Holly Golightly
Advertisement:

Well-known for being the movie in which Hepburn wears a fabulous black Givenchy dress and holds a cigarette in a holder, and introduces Henry Mancini's Academy Award-winning song "Moon River" while strumming a guitar on a fire escape. In this version Holly probably isn't a hooker (though she does seek out wealthy men to have flings with, more like an old-world courtesan), while the story's nameless gay writer is now a straight gigolo (or something close to it) named Paul Varjak, who has a tumultuous relationship with Holly.