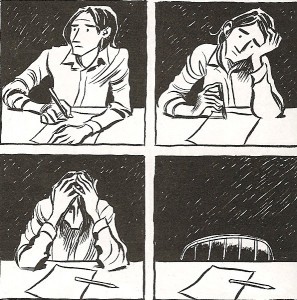 When a character is a writer and his creative efforts are stalled, his torment is invariably displayed as a montage. The sequence inevitably includes shots of ashtrays slowly filling to overflowing, bottles of booze (or pots of coffee) slowly emptying, a ticking clock, typewritten letters appearing one at a time to form words on a page, and a series of shots of the author at his typewriter: putting in a fresh sheet of paper, typing, pulling out the sheet to crumple it up and throw it away with a disgusted look, and shots of the trashcan overflowing more and more. Other possible shots include his worried agent or publisher, everyone in the house knocking on the door one at a time wondering if he's still alive, the writer sitting in various positions on his chair, and the despairing creator punching a hole in the wall. See also Wastebasket Ball.

When Played for Laughs, there is almost always a sequence where the writer several times puts a sheet into the typewriter, types a few words, and pulls it out to crumple and throw away, followed by putting a new sheet in, staring at the blank paper for a moment, then pulling it out, crumpling it and throwing it away.

Generally a Discredited Trope nowadays — despite that, aside from the outdated typewriter and the fact that not all writers smoke, the basic idea is close to Truth in Television, right down to the inability to leave the desk before finishing that blasted paragraph just right.

Sister Trope to "How I Wrote This Article" Article, when the finished piece of writing is about the experience of writer's block.

After insisting he can write a 200-page memoir in five days, BoJack learns the hard way that writing is a lot harder than it looks.

After insisting he can write a 200-page memoir in five days, BoJack learns the hard way that writing is a lot harder than it looks.