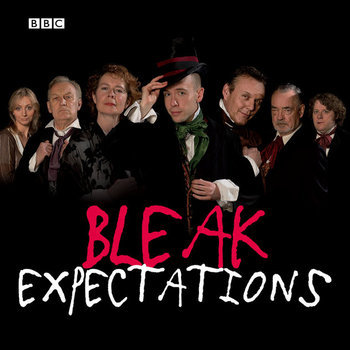 Bleak Expectations is a BBC Radio 4 comedy series, parodying the works of Dickens, and Radio 4's own adaptations of them. (The third season was broadcast concurrent with a straight dramatisation of Our Mutual Friend, and a listener wrote to Radio 4's Feedback to say it was difficult to tell them apart.)
Advertisement:

The first season tells the tale of young Philip "Pip" Put-That-In-The Bin, who, after the suspiciously contrived death of his father, is separated from his insane mother and sent to a Boarding School of Horrors by his cruel guardian, but nonetheless manages to make his way in the world and come out on top, thanks to perseverance, intelligence, and a series of Contrived Coincidences.

The second tells how everything starts to go wrong again, when Pip's guardian comes Back from the Dead to wreak his revenge, and the third, fourth and fifth continue on much the same lines, only Mr Gently Benevolent is now undead, and the plot has slipped away from pastiching others to forge its own unhinged path.

The adventures are presented as being told by the now-elderly Sir Philip Bin to a Times journalist he despises. In the second season, the journalist has become his son-in-law, which makes Sir Philip despise him even more.

Creator Mark Evans released a novelization of the first series in November 2012, accompanying the beginning of the final series. A TV Spiritual Successor, The Bleak Old Shop Of Stuff, was broadcast on BBC 2 in 2011.

Bleak Expectations has examples of: