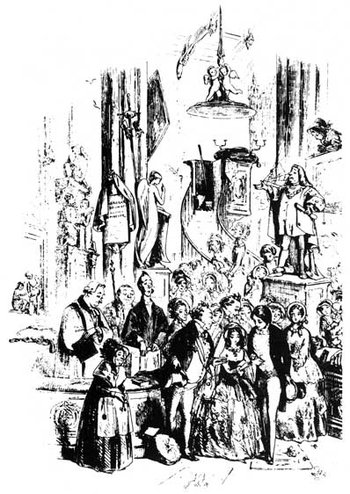 David Copperfield is a coming-of-age tale that follows the title character almost literally from birth to death. In between that is Charles Dickens at his finest...

Little David's father dies before he's even born, and his mother Clara dies not many years later, leaving him in the care of Mr. Edward Murdstone, his Wicked Stepfather. Murdstone in turn heartlessly turns little Davey out into the big bad world, first in a Boarding School of Horrors in which he's beaten and humiliated on a regular basis, then to earn his own living in a factory. While navigating Victorian London at the tender age of ten or so, David boards with the Micawbers, a good-natured but completely irresponsible family who make him pawn the silver to buy supper and eventually end up in debtor's prison.

Desperate, David runs away, finally reaching a safe haven with his eccentric Aunt Betsey Trotwood - who magnanimously forgives him for not being a girl - and her own... interesting... coterie. It's at this point David meets Uriah Heep, a clerk in the local law office, whose fawning professions of 'umbleness' mask a scheming, vengeful nature. By the time David's graduated high school Uriah's well on his way not only to taking over the business but menacing David's sweet, beautiful best friend Agnes Wickfield, the boss' daughter, with plans for their marriage. In his spare time, Uriah cheats Aunt Betsey out of her fortune just as David's fallen hopelessly in love with his boss' daughter Dora. Even Micawber, now Heep's clerk, is acting strangely. Oh, and over in the main subplot, David's oldest and dearest school friend, James Steerforth, is busily seducing and ruining David's childhood sweetheart, little Emily...

...do you see a pattern here? It doesn't help that David is by nature a sensitive artistic type who suffers miseries under hardship. Nor that he's so ridiculously gentle and naive (Steerforth dubs him 'Daisy', as in 'fresh as a...') that he's taken advantage of more or less constantly.

Nevertheless, in the main, the book reads as a sweet-natured comedy. Good ol' Dave is repeatedly downed but never broken, making it through his crummy life by relying on his imagination and on his true friends, at least one of whom is always to be found standing loyally by his side (albeit how they get there often stretches deep into Contrived Coincidence territory). The valiant but foolish Micawbers, the stalwart seafaring Peggottys, the diamond-in-the-rough Tommy Traddles — they may be eccentric, they may be impecunious, but they're always loveable, as only Dickensian characters can be.

Through his involvement in their convoluted adventures, and the lessons in pluck and determination arising therefrom, David finally rises to the top: marrying his One True Love — well, his second after Dora, she's dead by now — having children, launching a successful writing career...

A lot of Dickens's books stem from direct experience, but David Copperfield is his most autobiographical tale and his 'favourite child' among his works. David's seemingly over-the-top anguish at being so degraded by factory work has its roots in Dickens' own trauma when at ten his father similarly yanked him out of school and sent him out to augment the family finances (Mr. Micawber is by all accounts an only slightly exaggerated portrait of John Dickens). Writing many years later, as a world-honoured and beloved man, he confided to friends that merely revisiting those memories caused him nearly insupportable pain.

Many critics have also hailed it as one of their favorite books, including Tolstoy and Freud. Several of its characters - including Aunt Betsey, villainous Uriah Heep and above all the Micawbers - became household names in the 19th-century and are still familiar to some extent today.

If it's mentioned anywhere in pop culture, it'll be because the individual has the title confused with the magician. Or, if someone mentions Uriah Heep, they'll confuse that with the British rock band.

Examples particular to the adaptations include: